Vanessa Marshall (LEGO Batman)
Katherine Von Till (LEGO Batman 2)
Laura Bailey (LEGO Batman 3)
Grey DeLisle (LEGO Dimension onwards)
Catwoman is a Batman villain who appears in LEGO video game series. A cat-burglar with a taste for luxury, Selina Kyle was an enemy and occasional love-interest for Batman. She was often assisted in her crimes by her pet cat, Roz, and a member of the Legion of Doom.

Like many other inmates, Catwoman was one of the fifteen villains that escaped from Arkham Asylum. She joined The Penguin's group as his deputy, along with Bane, Killer Croc and Man-Bat. Their plan was to attack the city using remote controlled penguin, which they would use to rob the citizens.

After they acquired a satellite dish to broadcast the signal, Catwoman helped Penguin break into the Gotham Natural History Museum to steal the Gotham Diamond. They are successful in stealing the diamond, but were forced to separate to escape the police. After being noticed by Batman and Robin, Catwoman fled across the rooftops with the diamond. Eventually caught by the Dynamic Duo, she threw the diamond to Roz, who escaped with the jewel. Catwoman was handed over to the GCPD and taken to their cells.

Whilst imprisoned, Roz returned to Catwoman. She phoned Penguin and used it as leverage for him to release her. Whilst Croc remained behind to hold of the officers, they escaped to the Arctic Lair to complete the device. After finishing and activating the device, Batman and Robin arrived, prompting Catwoman to fight them. However, they managed to disable their machine, eventually arresting her and Penguin. Like the other villains, Catwoman was returned to Arkham and could be seen cleaning her ear.

Catwoman is one of the villains released by Lex Luthor and the Joker during their escape from Arkham. Along with Bane, Penguin, Harley Quinn, Poison Ivy, Riddler and Two-Face, she attempted to escape, but was stopped by Batman. However, she and the other inmates were able to escape the GCPD and fled into Gotham.

Following the escape, Catwoman can be found on the Gotham City Police Department's roof, where she can be fought as a boss. After defeating her, she can be purchased as a playable character.

Catwoman does not appear during the main plot, but is part of two side-missions. The first has her searching for a valuable cat statue on the Justice League Watchtower. After completing this mission, she is made available to purchase as a playable character. In the second side-mission, Catwoman steals Kevin Smith's latest film, due to its terrible quality. She is forced to give it back after being caught by the player.

Catwoman does not directly feature in the game, but her The LEGO Batman Movie counterpart is featured as part of its pack.

Catwoman first appears with Two-Face in the GCPD vault, where they help Riddler, Scarecrow and Clayface escape Batgirl and Nightwing. She takes part in the subsequent fight at the Iceberg Lounge. Whilst trying to steal a diamond, Catwoman is confronted by Owlman, who takes the jewel for himself. She is able to escape before the GCPD arrive and round up the other villains.

Making her way to the Legion of Doom, Catwoman reported her findings to the group, many of whom had also received villainous behaviour from the other Earth-3 "heroes". After Killer Frost and the Rookie learned that they were actually villains called the Crime Syndiate, Catwoman attempted to tell Perry White, but was thrown out of the office. When Kent Clarkson offered to expose evidence, she searched for Harley Quinn after learned that she had a video of them banishing the Justice League.

Catwoman later helped calm Poison Ivy when she attacked the Rookie, Frost, Deadshot and Captain Boomerang for damaging her plants. When Quinn was kidnapped by the Syndicate, she and Frost held them off whilst the others attempted to expose the criminals. Catwoman remained with the Legion of Doom to fight the Earth-3 villains, but was incapacitated when Lex Luthor betrayed the group.

Catwoman also helped Batman battle Steppenwolf when he kidnapped the Rookie. After the final battle with Darkseid, she, the Legion and Justice League confronted Luthor after he attempted to banish them all to Apokolips. After the Rookie decided their fate, Catwoman and the other villains fled to avoid capture by the heroes. 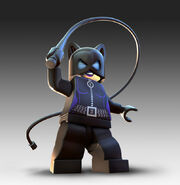 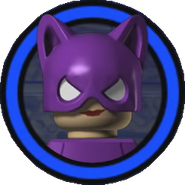 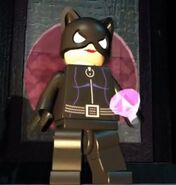