Batman & Robin
Catwoman is a 2004 American superhero film loosely based on the DC Comics character of the same name. Released on July 23, 2004 by Warner Bros. Pictures, the film was panned by critics and was a box office bomb, grossing $82 million against a budget of $100 million.

Patience Phillips is a shy, timid artist working for a cosmetics company. One morning, she sees a cat outside her window. Thinking it is stuck, she climbs out onto a ledge and nearly falls. A detective named Tom Lone, spots her and thinks she is attempting suicide, and rescues her. After believing her story the two gradually form a relationship.

While delivering a new design to her boss, Patience overhears a plot to sell defective beauty products that initially make human skin look younger and prettier; if the product is not used over a long period of time, however, the skin begins to decay. Unfortunately she is spotted at the scene and attempts to flee into a set of water conduits. The pipes are flooded by her pursuers, and she drowns.

After being murdered, she is brought back to life by the temple cat she saw earlier, because the cat was moved by the fact that she risked her own life for it. The cat is actually The Great goddess Bastet. The Egyptian Mau is the leader of several feline deities such as Sekhmet, and Mafdet. When she wakes up, she is transformed into Catwoman, a warrior with the force of a cat, who prowls the night in search of justice. The catwomen were also meant to teach a life lesson to all humanity: There is no pure good or evil. There is no black or white, We are all grey beings. This is shown when she fights and wins against two men who rob a jewelry store. Her behavior becomes cat-like, and she gains heightened reflexes, senses, and physical power.

Determined to discover why she was murdered (having forgotten the events that occurred the night before), Patience re-learns about the beauty product and when she goes to the factory where the product is made, she finds a scientist who protested against the product's release murdered. Before she can investigate further, however, the night guard spots her and sounds the alarm. Patience quickly flees the factory. She then informs her boss's wife, Laurel Hedare, about the plan and asks her to keep an eye out for anything unusual.

Catwoman then heads to the opera house where her boss, George, is attending a play with another woman. She confronts him about the product, but he doesn't know about its toxic after-effects. The police arrive and chase Catwoman, who is able to escape by cutting off the power.

Patience and Lone then go out on a date at a sushi restaurant, where they talk about Catwoman. When they leave, they go to Patience's home where they make love. Lone wakes up in the middle of the night and finds one of Catwoman's claw nails.

Later, Laurel contacts Catwoman, and tricks her into entering a room with Patience's brutally murdered boss lying on the floor. Laurel then calls the police after tossing a gun into Catwoman's hand. As she flees the house, Catwoman realizes that Laurel was the one who insisted on the product's release and murdered the scientist who tried to stop it.

Catwoman's lip prints on Lone's cheek matched up with those of Patience from a glass cup, and she was taken into custody by Lone. That night she was able to escape from her jail cell by squeezing through the bars like a cat.

Meanwhile, Lone goes to Laurel, while she holds a press conference for the beauty product and a tribute to George. They go to her office and talk, and during their conversation, Laurel lets slip that she was the murderer of the scientist and her husband. But, before Lone can arrest her, she pulls a gun and shoots him in the arm. Catwoman then arrives, and rescues Lone just as Laurel is about to finish him off. After taking out her henchmen, Catwoman confronts Laurel, and they fight, though Laurel's face is now like "living marble" from using the product for so long. A fight ensues between Catwoman and Laurel. Catwoman is eventually pinned onto a glass window where she is repeatedly struck in the belly with a metal pipe. The strikes to her stomach are so hard she doubles over in pain. Laurel continues to abuse Catwoman's belly until the glass behind her breaks.

During the fight, Catwoman slashes her face and causes it to rip. As Catwoman finishes scratching her face, Laurel accidentally falls off the broken glass window she tried to push Catwoman out of. Catwoman attempts to save her as she's hanging on, but Laurel accidentally slips and falls to her death. Detective Lone comes and saw what happened. He then reassures Patience that she will not be found guilty for the murders.

At the end of the movie Patience sends an art piece of hers and a thank you note to the woman who owns the cat that revived her. This woman, "Ophelia Powers", also helped her remember her death and told Patience the powers her cat gave to her and her new freedom. Patience also sends a letter to Detective Lone, saying good bye and thank you, and walks off into the night, happy with her new powers and independence.

Catwoman (trailer 2)
Add a photo to this gallery 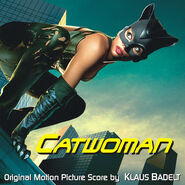 Catwoman: The Movie and Other Cat Tales

Mad Libs
Add a photo to this gallery

Before the film was released, perplexities were raised by the notion that the protagonist would be a woman with feline superpowers, whereas in most adaptations Catwoman is a highly trained but normal woman fond of cat-themed theatrics, with no superhuman powers. The debate subsided when it was learned that the character played by Berry would not be Selina Kyle, the original Catwoman from the comics, but an entirely new one, named Patience Phillips. Perplexity remained over the decision to omit the Selina Kyle character and depart so significantly from the source material however. Other criticisms included the similarities between the new character's origins and that of another comic book character, The Crow (also adapted into a film version).

Catwoman was poorly received, both critically and at the box office. The film appeared on the list of Roger Ebert's most hated films. He criticized the filmmakers for giving little thought to providing Berry "with a strong character, story, supporting characters or action sequences.", but his primary criticism came from the disaster of the film to give the audience a sense of what her character experienced as she was transformed into Catwoman. Film critic Bill Muller of the Arizona Republic suggested that maybe Berry should give back her 2002 Academy Award as a penalty.

This film received seven Golden Raspberry nominations in 2005. It won in the categories of Worst Picture, Worst Actress, Worst Director, and Worst Screenplay. Halle Berry accepted the award for Worst Actress personally, and saying, "First of all, I want to thank Warner Brothers. Thank you for putting me in a piece of shit, god-awful movie . . . It was just what my career needed.". She has gone on to speak frankly in interviews about her views regarding problems with the film.

Retrieved from "https://batman.fandom.com/wiki/Catwoman_(film)?oldid=217304"
Community content is available under CC-BY-SA unless otherwise noted.