"Your allies have been slaughtered. Your city is burning to the ground. I have taken everything from you, piece by piece. Watch, Bruce… Watch as you lose everything"
―Cluemaster

Arthur Brown or the Cluemaster is a criminal mastermind enemy of Batman and the evil estranged father of Stephanie Brown. After losing his job as a game-show host, he became a criminal mastermind who left behind puzzles like the Riddler, before abandoning this gimmick for more strategic schemes.

Cluemaster was a criminal devoted to finding out the true identity of Batman. Similarly to the Riddler, he left clues and puzzles at the scenes of his crimes to flaunt his own intelligence. This resulted in Batman being able to track Cluemaster's patterns and defeat him.

Cluemaster later joined the Penguin's syndicate, "The Gangland Guardians" which fought against Mister Esper and the Gangland Guardians who wished to take over Gotham's criminal underworld. To fight this group, the super-criminals protected Batman's life from Esper and Cluemaster in-particular saving Batman from dying in the Batcopter.

Cluemaster was once a failed gameshow host who turned to crime and used game-show inspired clues and puzzles as his criminal calling cards. With a woman named Crystal Brown, Arthur had a daughter named Stephanie. Arthur started his criminal campaign as, "The Cluemaster" by a daring but unsuccessful attempt to learn the secret identity of the Batman, in order to gain a fighting edge but his plan failed and he was defeated by Batman.

Cluemaster was defeated and sent to Blackgate Penitentiary where he seemingly rehabilitated but actually just moved past his need for gimmicks. Cluemaster was amongst those broken out by Ra's al Ghul along with the inmates of Arkham Asylum and equipped with replications of their gear. He was apprehended and brought back to prison after this incident.

Cluemaster made his grand reappearance in Detective Comics #647 by Chuck Dixon and Tom Lyle. In this three issue story, Cluemaster has reformed and been released from Blackgate. Cured of his tendency to leave clues, Cluemaster originally joins a gang and plans their heists in exchange for 10% of their winnings. Later he kills the leader by suffocating him by putting a strong polymer over his mouth and nose, the bonds could only be broken by one substance which Cluemaster withheld from the gang leader. Cluemaster then begins to plan a master heist. During this time it is revealed Arthur Brown has a daughter named Stephanie, but rarely spends any time with her due to long periods of incarceration.

When he returns to Gotham, "rehabilitated," Stephanie becomes furious when she discovers that he has returned to crime without his need to leave clues behind. Making a costume for herself, she calls herself the Spoiler, finds out her father's plans, and leaves clues so that the police and Batman can stop him. Robin spots Spoiler on the rooftops during a police bust of Cluemaster's apartment and unmasks her, though she incapacitates Robin by hitting him in the face with a brick. Robin tracks her down and Batman, Robin and Spoiler set up plan in motion to take down Cluemaster, forbidding Spoiler from going to the bust because she was only motivated by revenge. Catching Cluemaster at his mall heist whilst he hauls a giant glass canister of money away by air, Stephanie is then held hostage by Cluemaster atop the canister, holding a vial of Acid to her face as Batman tries to stop him. Batman tells Cluemaster to stop and Cluemaster, thinking Batman will only lecture him about how it is morally wrong to disfigure a child, is taken aback when Batman simply reveals Spoiler is his daughter. Spoiler uses the shock of the revelation to gain the upper hand and attempts to use one of the chains attached to the Gunship lifting the canister to strangle Cluemaster, but Batman prevents this. Cluemaster is taken back to Blackgate.

Each time the Cluemaster escapes or start some new plan, Stephanie dons her costume again in order to foil him. Eventually, she realizes she enjoys being a hero, and begins regular patrols as Spoiler. For a brief period of time she even replaces Tim Drake, as Robin, although her reckless and rebellious take on crimefighting has made her largely unfit for the role.

With several other villains, Cluemaster becomes a member of the Injustice League, then later the Justice League Antarctica, attempting to reform. Cluemaster and his teammates volunteer to join the second Suicide Squad, a group sanctioned by the US government, in return for a full pardon of his crimes. The Cluemaster also hopes to make Stephanie proud of him.

During the mission, which involves dealing with terrorists and a lovesick genetic experiment, Cluemaster sees his friends, Big Sir, Clock King and Multi-Man die. Only the first two are tragedies in his view, as Multi-Man has died many times before. In the resulting chaotic battle, Cluemaster seemingly saves Major Disaster's life twice, though the Major admits the situation was confusing. Cluemaster is seen shot many times through the chest. He survives this incident, with a year's recuperation in the hospital and many, many scars. He is encouraged by thoughts of his daughter.

When he got out and discovers that his daughter has been killed, he takes on the secret identity Aaron Black and creates the "Campaign for Culpability", blaming Batman for his involvement in Stephanie's death, saying that she was not the first child working with Batman to die (which is indeed true), and that Batman should be brought to justice.

Arthur Brown was a genius-intellect gameshow host whose career was ruined when he lost his patience on a contestant. After the scandal, Brown became the criminal, "Cluemaster" who left behind clues and puzzles to prove his intelligence. Cluemaster crossed paths with Batman, who was able to foil his schemes and considered Cluemaster to be, "A second-rate Riddler knock-off".

The War of Jokes and Riddles

In the Rebirth story the War of Jokes and Riddles, Cluemaster is one of the Gotham super-criminals who sides with the Joker during a citywide gang-war between Joker and Riddler. Cluemaster is put on a team with Kite-Man, Man-Bat, the Ventriloquist, Tweedle Dee and Tweedle Dum. When Joker loses the advantage during the war, Cluemaster persuades his team into intentionally getting caught by Batman, explaining how if they stay with Joker the Riddler will kill them, if they try to run Joker would kill them and if they switch-sides that either of the villains could kill them.

After fighting with Batman and the first Robin, Batman was able to find out Cluemaster's alter-ego. Batman let Cluemaster go upon seeing he was supporting his young daughter, Stephanie Brown. After this, Arthur and his wife divorced and Stephanie learned of her father's super-criminal career. Stephanie took up the vigilante alias of, "The Spoiler" to spoil her father's crimes and went on to become a member of the Bat Family.

Night of the Owls

For two years, Cluemaster followed a trail to uncover the existence of the Court of Owls, a secret society which ruled Gotham from the shadows. When Cluemaster found the high-ranking owls meeting in the Gotham Harbor House, the leaders were all dead in an assassination arranged by member, "Lincoln March". Cluemaster was able to persuade March to join forces with him in a plan to defeat Batman.

Cluemaster and March created a scheme that would destroy Gotham City through having larger villains like Mad Hatter and Hush to distract and exhaust the Bat-Family while he and a team of lesser super criminals including Lock-Up, Ratcatcher, Firefly, Prankster and Signalman performed the actual tasks to bring down Gotham. Arthur also hired the cannibalistic hitman, "El Flamingo" to assassinate his own daughter, Stephanie, a plan which failed.

By the end of the plan, Cluemaster having had worked Batman to exhaustion managed to set Gotham aflame, learned Bruce Wayne's secret-identity, and strapped a beaten Batman to the shattered Bat-Signal atop the GCPD building. Cluemaster mocked the vigilante and nearly murdered him with a pistol to the head only to be shot himself by Owlman as part of the greater plan.

Arthur Brown as the Cluemaster made a cameo appearance in the Batman: The Brave and the Bold episode "A Bat Divided!", playing billiards with Tiger Shark, Catman, and the Spinner at the "8 Bar", a known haunt for third-rate costumed villains. The bar was soon crashed by three atomic counterparts of Batman, each seeking action. One of the Batmen warned Cluemaster and the other villains that "I know what you did!..and I'm here for you. So we can do this the easy way....or the hard way!" In response, the villains charged the doppelganger Batman. Cluemaster vaulted onto the billiard table to seize the Batman counterpart, and was badly beaten, staying down for the rest of the fight.

In the video game Batman: Arkham Knight, Cluemaster is referenced in the Panama Studios area of Gotham City in the form of a game-show billboard reading "Arthur Brown's Price Change". Thug's can also be overheard talking about how as Cluemaster he never gained much traction in the criminal-underworld due to seeming to be a blatant rip-off of the Riddler. 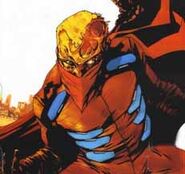 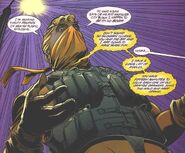 Being recruited by the Suicide Squad 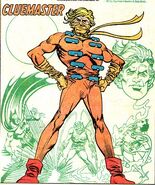 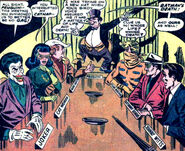 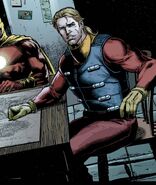 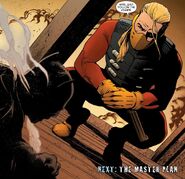