Gotham City
After Oswald Cobblepot formed an alliance with Max Shreck he moved into this old two-story storefront building. The top floor of his office became the new headquarters for the Red Triangle Circus Gang and was decorated with their paraphernalia, while the bottom floor was made over by Shreck's image consultants.

When Shreck convinced Cobblepot to run for Mayor, the building became the campaign headquarters.

In Wesley Strick's screenplay the building is described as a large warehouse. The scene where Christopher Walken offered fresh fish to DeVito in the upper office area was among one of the first things filmed for the movie. 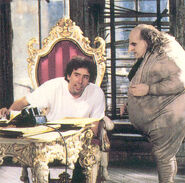 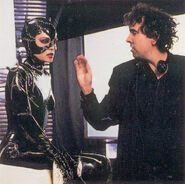 Add a photo to this gallery
Retrieved from "https://batman.fandom.com/wiki/Cobblepot_Office_Building?oldid=200069"
Community content is available under CC-BY-SA unless otherwise noted.