After successfully framing Batman for the murder of the Ice Princess, Penguin made this a major theme for his speech at a rally the next day. Max Shreck planned to celebrate with him that evening at his annual Maxquerade Ball.

Selina Kyle who had previously been betrayed by Penguin was watching the speech from a distance.

At the speech, Penguin was assuring the audience that he would be a far greater protector of Gotham instead of the Mayor he was campaigning against relying on Batman.

However Batman managed to hack into the frequency of the stage speakers and play recordings of Penguin insulting the Gothamites from their previous encounter; "Hey just relax, I'll take care of the squealing wretched pinhead puppets of Gotham" and "You gotta admit, I played this stinking city like a harp from Hell!"

These words angered the Gothamites and Shreck seeing that Penguin is now exposed for the true villain he is, abandoned him on stage. Selina left as well and the rest of the Gothamites then threw eggs and other produce at him. Penguin responded by using his machine gun umbrella and escaped, returning to the sewers.

Angered by being abandoned by Shreck, Penguin would crash his masquerade ball later that night 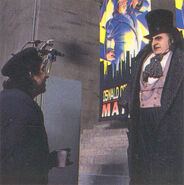 Retrieved from "https://batman.fandom.com/wiki/Cobblepot_Rally?oldid=221289"
Community content is available under CC-BY-SA unless otherwise noted.