Can cause fear or hallucinations through telepathy

Kameron Omidian
Cornelius Stirk is a cannibalistic serial-killer enemy of Batman. He is a cockney meta-human who has the unexplained power to augment how others perceive him, allowing him to turn into comforting or horrifying figures. His modus operandi involves using his powers to lure away Gotham's homeless to torture them with his fear powers, and turn their hearts into a soup which he believes fuels his power.

Stirk, like Scarecrow, uses fear to get to his victims. Stirk has the ability to make other people see him as someone else, allowing him to get close to his victims. He operates under the delusion that he requires the nutrients and hormones from people's hearts in order to stay alive, and these are best prepared with norepinephrine by inducing fear in the victim prior to death.

In his first appearance, Stirk is released from Arkham Asylum, where he is confined to at the age of 16 for trying to kill a classmate, after being certified as sane - probably following his use of his psychic abilities on his doctors. He then subsequently stops taking his medication and begins his escalation into a serial killer. Stirk preyed on Gotham's homeless population before being stopped by Batman and sent to Arkham Asylum.

While in Arkham Asylum, Cornelius Stirk was amongst the inmates released on Batman within Jeremiah Arkham's, "Punishment Room" for the Dark Knight. Stirk and the other villains were defeated by Batman and presumably returned to their cells afterwards.

During the Batman: Knightfall storyline, Stirk works with the Joker in an attempt to kidnap Commissioner Gordon. However, he wants to kill Gordon rather than kidnap him, much to Joker's dismay. Gordon hallucinates that Stirk is actually Batman as Stirk tries to kill Gordon with a knife. Batman stops Stirk, but Gordon is still screaming in fear. In order to capture Stirk, Batman is forced to leave a terrified Gordon with his wife, who takes him to a hospital.

Stirk recently made his return in Kevin Smith's storyline Batman: The Widening Gyre.

Cornelius Stirk is able to cast a hypnotic aura which allows him to take on any face he chooses, generally a face that people will trust. He can also cause hallucinations through the use of telepathy. 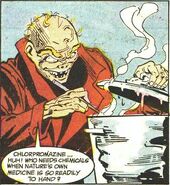 Stirk in Jeremiah Arkham's "Punishment Room" (between The Joker and Poison Ivy)
Community content is available under CC-BY-SA unless otherwise noted.
Advertisement