Deadshot was an international assassin hired by the Russian in Gotham City to kill Batman.

Born into a wealthy and wild family notably considered to be expert marksmen through the male line since before the American Revolution, Floyd Lawton grew up excelling in this skill while his older brother Thomas failed in it miserably, much to the latter's everlasting fury. By age 13, he and Thomas were instigated by their mother into a three way shootout with their father, whose abuse and infidelities drove her half-mad. The gun battle eventually ended with his brother dead and his father convicted of the murder, leaving Floyd alone.

After carrying out an assassination on the mayor of a nearby city, Lawton returned to his tropical base, where one of his associates hired him to carry out another hit confirmed to have been placed by Gotham mafia boss Yuri "the Russian" Dimitrov on Major Crimes Unit lieutenant James Gordon. As a result, Batman was called in to protect Gordon, unaware the announcement concerning the lieutenant was actually a ruse to get the vigilante, who the hit was really placed on, out into the open. He gave MCU Det. Crispus Allen the handheld PDA device he stole from Marshall containing a link to the land developer's encrypted e-mails to the assassin, then follows Gordon's motorcade with his butler Alfred Pennyworth providing satellite-imagery assistance using WayneCom satellites. Deadshot attempted to shoot Gordon from a moving train, but Batman deflected the bullet. He then gleefully revealed the bat-masked figure as his real target, and opened fire as the train entered a tunnel. Batman attempts to charge the hitman only to get injured, falling off the train. While gloating, Deadshot advanced to where he saw his opponent fall, but was ambushed from behind and disarmed. He and Marshall are arrested. Wayne confides to Alfred about how similar the fight in the tunnel seemed to the night his parents were murdered, and comments that "I've been trying to stop those two bullets all my life." He expresses discouragement, and Alfred agrees, but adds that he thinks Bruce has a higher purpose. Wayne looks up at the sky and sees the Bat-Signal. 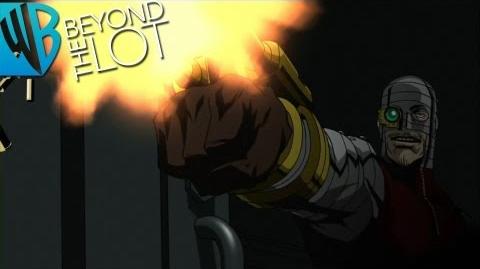