"When a man earns my respect that means I do not rest, I devote all my energy, everything I have, to killing him!"
―Deathstroke[src]

Slade Wilson, also known as Deathstroke, is a mercenary and assassin. Of former military status, subject of a failed medical experiment, he has since taken up work as a mercenary, armed with multiple weapons, and considered expert with edged weapons, firearms and explosives. Distinguishing characteristics include an impaired right eye, graying hair, and orange accented black body armor. His augmentations, coupled with his mastery of hand-to-hand combat make him a formidable opponent.

Wilson was an accomplished member of the special forces. This distinction earned him admittance into a covert program where he was subjected to extensive mental and physical augmentation. The procedures left him with increased mental function, as well as enhanced speed, strength, and stamina.

Following his military service, Wilson worked for various private military contractors before striking out on his own – and allegedly becoming one of the highest paid contract killers in the world, specializing in high profile assassinations. His unique weapons and abilities include regenerating health and super strength, a rifle-staff with a built-in grapple, a sword, explosives, firearms, and his own version of "Detective Vision", called "Tactical Vision".

After he worked on assassination, he made an alliance with the Arkham Knight and Scarecrow to turn Gotham into a city of fear.

Slade Wilson was an accomplished member of the special forces. This distinction earned him admittance into a covert program where he was subjected to extensive mental and physical augmentation. The procedures left him with increased mental function, as well as enhanced speed, strength, and stamina. Though much of the file is redacted, it appears that Slade was eventually discharged from the military, though the exact circumstances are not specified. He has since taken up work as a mercenary. His augmentations, coupled with his mastery of hand-to-hand combat make him a formidable opponent.

Following his military service, Wilson worked for various private military contractors before striking out on his own – and allegedly becoming one of the highest paid contract killers in the world, specializing in high profile assassinations. FBI files link Slade Wilson to the assassination of various offshore dictators and business people. Less is known about his domestic activities. Additional skills include: Weapons expert. Demolitions expert. Close quarters combat. Ambush techniques. Deathstroke was armed with multiple weapons, and considered expert with edged weapons, firearms and explosives. Distinguishing characteristics include an impaired right eye, graying hair, and orange accented black body armor. By the time he was contracted to take out Batman, he had managed to commit at least 40 instances of murder, including 26 of the first degree, and 14 relating to the assassinations of public figures, and was 45 years old.

"It appears the game is over before it even begins."
"I'm not playing games, Slade.
"
―Deathstroke and Batman[src]

Eventually, he was contracted with an assassination job on Batman for $50,000,000 by Black Mask, or rather, the Joker. After he dispatched several cops (presumably on Black Mask's payroll as a test), he then lured Batman to a parking garage with an explosive briefcase made by Queen Industries and some of Black Mask's men. He then lay in wait nearby, anticipating the likelihood that Batman would escape the explosion, and proceeded to fight him. Although they fought evenly, Deathstroke was slowly getting the upper hand, although his sword ended up shot apart by a sniper round from Deadshot, who had also been contracted with the hit. Batman eventually managed to escape. Deathstroke in the aftermath then confronted his employer with the knowledge that he hired at least one other assassin besides him for the job, although Black Mask mentioned that he "had his chance," and that the night was "still young" before brutally executing one of his men that was severely wounded from the blast by smashing him with rubble.

On Christmas Eve, Batman learns that eight assassins are in Gotham City to claim the $50 million bounty put on Batman's head by The Joker, under the guise of Black Mask. Among the assassins was Slade Wilson, aka Deathstroke, who Batman learned to be of former military and subject of a failed medical experiment. Apparently, he had to attack an entire wave of people when Black Mask's men supplied him with the envelope containing the hit. Batman tracks down the Penguin aboard his ship, the Final Offer, and interrogated him regarding Black Mask's whereabouts. Before the Penguin spilled everything out, a grapple claw grips Batman's ankle and drags him out of the room.

"Your methods and tatics are impressive, but inferior. They will not save you."
―Deathstroke to Batman[src]

Deathstroke appears while he circles Batman with a sword drawn. Batman, however, takes Deathstroke's sword with a fast disarming move and uses it to free himself before gliding down to the gladiator pit below. With Deathstroke following, the two prepared themselves for hand-to-hand combat. In the ensuing melee, Deathstroke uses weaponry and martial arts to fight against Batman's "inferior" combat methods and tactics. Countering his attacks, Batman was able to unmask Deathstroke and break his rifle-staff, forcing the mercenary to draw his sword. Slade then asked Batman "What are you?" before being knocked out by the masked vigilante. After the battle with Deathstroke, Batman makes his way to solve the Lacey Towers murder Penguin spoke about, while Deathstroke himself was taken into GCPD custody.

Throughout the night, Batman had been following Black Mask's trail until he discovered that a criminal called "Joker" had been impersonating him, and was the mastermind behind hiring the assassins. The truth would be shown by the time Joker was locked up at Blackgate Prison, where Deathstroke was also locked up in. By the time Batman arrived to Blackgate to stop another riot, Deathstroke was the one of the few, if not the only prisoner still locked in his cell. While doing push-ups, Deathstroke spoke briefly with Batman, revealing Joker wouldn't let him out for good reason, as he didn't like his time wasted. He also assured Batman to not worry about being pursued anymore - not unless someone else puts up $50 million bucks. Batman then left Deathstroke in his cell.

Later, a still-imprisoned Deathstroke continued doing push-ups when Amanda Waller came to Blackgate. Deathstroke, while continuing his push-ups, acknowledged Waller's presence and revealed that he anticipated her arrival. Waller approaches Deathstroke's cell, tossing him a paper with "Suicide Squad" written on it. Deathstroke asked what happens if he doesn't sign, and Waller simply says "You rot in here, or you work for me."

At an unknown point later, Deathstroke managed to somehow escape from Waller.

Ten years after he encountered the Bat, Deathstroke joined an alliance with the mysterious Arkham Knight and the sinister Scarecrow to turn Gotham into a city of fear after Joker's death. Deathstroke oversees his alliance's campaign and serves as a secondary commander of the Militia.

After Batman's confrontation with the Arkham Knight, Deathstroke takes charge of commanding the remnants of the Militia. Once taking down the remaining forces, Slade and several Cobra tanks confronted the Dark Knight only for the mercenary to be taken down by his opponent and brought to the holding cell at the GCPD where his leader, Scarecrow, was kept at. 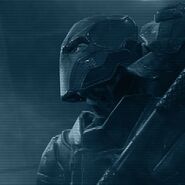 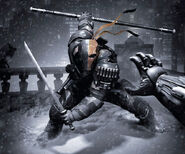