Denise Di Novi is an American film producer and director. From 1989 to 1992 she headed Tim Burton Productions, where she produced several of the director's most successful films. Burton brought her on to become the primary producer Batman Returns, along with Larry Franco. The producers of the previous film, Jon Peters and Peter Guber, were forced to step down, relegated to being credited as "Executive Producers." Peters in particular was barred from being on the set during filming, as he had often come into conflict with Burton previously.

Di Novi also helped Burton and Waters develop a Catwoman spinoff movie, after an unsatifying script Burton lost interest but Di Novi stayed with the project for years and many different iterations. This eventually resulted in the 2004 film starring Halle Berry. 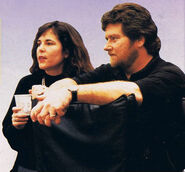 with Larry Franco in Shreck's

Retrieved from "https://batman.fandom.com/wiki/Denise_Di_Novi?oldid=204269"
Community content is available under CC-BY-SA unless otherwise noted.