Batman Wiki
Register
Don't have an account?
Sign In
Advertisement
in: Batman: The Animated Series Characters, The New Batman Adventures Characters, Batman Beyond Characters,
and 2 more

"Hey, no one can be a Boy Wonder forever."
―Dick Grayson[src]

Dick Grayson is an ally of Batman and was the first Robin, helping the Dark Knight defend Gotham City from crime. After reaching adulthood, he has now established himself in Blüdhaven, protecting the city as Nightwing.

Dick is a former member of the Flying Graysons acrobatic family in Haley's Circus. Dick and his parents performed nightly with their death defying high wire acts. When the circus came to Gotham City, the gangster, Tony Zucco tried to extort protection money out of the owner, but he refused to cooperate. In retaliation, Zucco sabotaged their high-wire trapeze act, staging an "accident" that ended in the death of Dick's parents. Bruce Wayne, who helped to get the circus to town, was in the audience and witnessed these events unfold. Wayne arranged with Commissioner Gordon of the Police Department to become the 10-year-old' boy's legal guardian. However, in the rather large and empty Wayne Manor, Dick became more and more detached. Alfred Pennyworth brought this to Wayne's attention, who was in his fledgling years as Batman, and had little time to spend with Dick. Eventually, Dick went out on his own and tracked down Zucco but was caught. Batman saved Dick and took him back to the Batcave, where he revealed his secret to Dick.

After personally training Grayson, Wayne allowed him to become his partner, Robin. Dick, apparently worked with Batman consistently well into his college years. Thereafter, he became Batman's semi-regular partner continuing to work with Batman on a limited basis but, also dividing his time between crimefighting and college. Nine years after his parent's deaths, Tony Zucco resurfaced in Gotham City, putting Robin to the test. Batman forbade Robin from going after him. Robin promptly disobeyed and tracked Zucco on his own. He finally found Zucco, but, Robin ultimately refused to kill Zucco and turned him over to the authorities. While Dick had thought that Bruce was simply cold hearted; Bruce got surprisingly emotional and he admitted that he didn't want Robin going after Zucco for fear of Robin being hurt or killed as a result. However, this would not be the last time Batman and Robin disagreed with each other. After graduating Gotham State University with highest honors, Grayson decided it was time for a change. A trust fund set up by the circus would keep him afloat indefinitely. Grayson also didn't like the way Batman was interrogating a henchman of the Joker mercilessly in front of his own family and left outraged. The final straw was Grayson discovering that Wayne knew Barbara Gordon, his girlfriend, was Batgirl, and never told him. Grayson relinquished the mantle of Robin and left Gotham to travel the world and find himself.

After graduating from college, Dick had a falling out with Batman over the tactics he used. He consequently left Gotham City and traveled the globe from studying various martial arts and crimefighting techniques. Around this time, he also gained access to a sizable insurance settlement which allowed him to be self-sufficient. After a few years of world travelling and training, he returned to Gotham City. He rejoined Batman's campaign as Nightwing, but his relationships with Batman and Batgirl became somewhat strained. In spite of this, he continued to work semi-regularly with Batman's crime fighting team. He worked with Batman to trick Catwoman into revealing the location of a stolen gem. He also helped get to the bottom of the Joker's fortune.

As Nightwing, Grayson has established himself an equal to Batman. However, Grayson eventually left Gotham to establish himself in the city of Blüdhaven. Nightwing was active into late age protecting his new city.

Dick Grayson is only mentioned in the show. For details of the comic book counterpart of the character, see Dick Grayson (Beyondverse).

Raised as a circus acrobat, Dick was capable of incredible feats of agility and gymnastic skills. Later, he trained under Batman as well as other masters of martial arts, stealth, and detection that made him rival his former mentor. Even as Robin, Dick Grayson demonstrated that he could at least hold his own with the ninja Kyodai Ken. 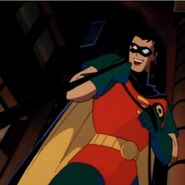 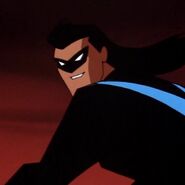 Dick Grayson and Barbara Gordon in an Alternate Timeline