Doctor Death (Dr. Karl Hellfern) is historically the first super-villain encountered by Batman. He has been reinterpreted several times throughout the series.

In his first appearance in Detective Comics #29, Doctor Death develops a lethal chemical agent from pollen extract and enacts a plan to use the poison to extort money from wealthy Gotham City citizens. He is assisted by a large East Indian manservant, Jabah. In an attempt to evade capture by Batman, Doctor Death ignites chemicals in his laboratory, presumably killing Jabah and himself in the resulting explosion. Doctor Death next appears the following month in Detective Comics #30. With a new accomplice, a Cossack named Mikhail, Doctor Death is this time successful in claiming a victim in his extortion scheme, but discovers that the poisoned man lost his fortune in the Depression. Batman intervenes in the plot and upon apprehending the doctor, discovers that Doctor Death's face is horribly disfigured from the lab explosion, resulting in a brown, skeletal appearance.

After several decades' absence, Doctor Death was reintroduced by writer Gerry Conway in Batman #345 and Detective Comics #512 (1982). Conway's story is an update of the original 1939 tale. In this version, Doctor Death is depicted as a paraplegic, but his deadly gas gimmick remains the same. He is assisted this time by a manservant named Togo.

Doctor Death was revived once again in Batgirl #42-44 and #50 (2003-2004) by writer Dylan Horrocks. His history is again slightly altered: Updated for an era of increased terrorism awareness, the modern Doctor Death is a producer of biological weapons, often selling them on the black market to terrorists and other criminals. He is now depicted as a bald, gnome-like man wearing a lab coat and an oxygen mask.

This incarnation of Doctor Death plays a minor role in Batman: War Games, Act Three where he is seen working with the crime lord Black Mask, releasing a gas into a crowd of panicking gangsters. Batman suspects that he and Black Mask are attempting to wipe out their competition.

Doctor Death remains active in the DC Universe following the events of Infinite Crisis. In the second issue of 52, he is mentioned as one of many mad scientists who have gone missing. He is depicted later in the series among other captured scientists and mad geniuses on Oolong Island. His appearance was also radically altered at this time, depicting him as having lidless eyes, extremely long skeletal fingers, a bald head with only a few matted strands of hair, no nose, as well as several rows of jagged fangs in his mouth, as well as wearing a green cloak. He also implies that this was his first visit to Gotham City.

Hellfern appeared in Batman #692 as an aide to the second Black Mask, Dr. Jeremiah Arkham. He was a member of a group called the Ministry of Science, a criminal group of mad doctors in Gotham united to fight Batman. Here, Doctor Death worked alongside Fright, Prof. Hugo Strange, and a recently revived Reaper.

Hush hires Doctor Death as part of his plans to ruin Wayne Enterprises. It shows his past revealing that Judson Pierce and Sallie Guzzo hired Hellfern to kill Martha Wayne and Leslie Thomas along with everyone else at Thompson's Clinic before he became Dr Death. A kid at the clinic discovers them but Hellfern injects him the disease he made and Sallie Guzzo beats the kid unconscious. Martha Wayne discovers him and takes him back to the clinic but the kid manages to warn them. Thomas Wayne manages to save the boy. Eventually Hellfern and co realise that Wayne has found the cure and escape. Back in the present Hush and co manage to gain access to Wayne Enterprises but Dr death plans to betray his group but Hush knocks him unconscious and shoots Judson Pierce. Dr Death wakes up and Pierce urges him to burn down the door he does so but it burns off all of Pierce's skin. Dr Death escapes still at large.

This continuity reimagined Helfern as being a scientist for Wayne Enterprises. Helfern had an interest in military-advancements due to coming from a family that had worked for the military as soldiers since World War II while Karl himself had a soldier son deployed in the middle-east. Helfern was hired by Lucius Fox where he was one of three scientistis leading a bio-initiative set up by then-CEO Philip Kane which studied regenerative healing for military use. Known as, "The Doctors Three" Helfern worked alongside Dr. Paul Dekker who studied cellular-regeneration and Professor Hugo Strange who studied neurology, all while Helfern's focus was in the study of bone growth.

While working at Wayne Enterprises, Karl recieved news that his son had died overseas. Not long after, he found out that he was fired from Wayne Enterprises due to his experiments' frequent failures. As the death of his son left him believing that there was no justice in the world and his work being all he had left, he made a deal with Edward Nygma to continue his experiments as a criminal scientists. Working for Nygma, he managed to find a chemical that caused accelorated bone growth and which horrifically mutated those injected with it.

After Philip Kane's murder in ACE Chemicals at the hands of the Red Hood, Helfern took up the moniker of, "Doctor Death" to hunt down other members of his old Waynt Ent. initiative. Karl would murder these scientists with an imperfect version of his formula, making their own skeletons grow out of control and rip them apart from the inside-out. These killings caused Helfern to be targeted by the Batman who prevented Doctor Death from killing Lucius Fox. Later, the two would fight atop a weather-balloon where Batman inadvertently killed Hellfern by snapping some of his bones, causing them to regrow into the doctor's brain. 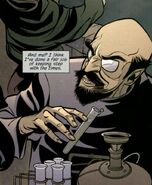 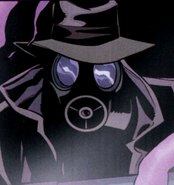 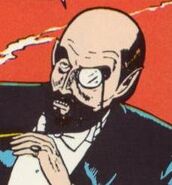 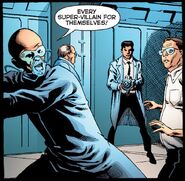 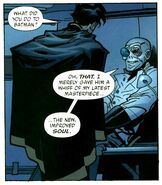 Other Doctor Deaths in DC Comics