Eddie is a young security guard at Arkham Asylum, one of the many present during the Joker's takeover of the asylum.

Eddie Burlow was one of the many security guards present at Arkham Asylum, when the Joker was recaptured by Batman. He was posted at the Intensive Treatment Center to help guard the Joker during his transferral. While the Joker was being taken through the Holding Cells by an asylum guard and an unidentified doctor, he broke free by using his handcuffs to strangle the guard. The Joker escaped into the Processing Corridor control office, setting loose all the prisoners housed in the Holding Cells, most convicts shipped to Arkham from Blackgate Prison after a mysterious fire. After setting the convicts loose on Batman when the Dark Knight attempted to follow him, The Joker sealed off the Processing Corridor. Eddie Burlow was one of the five security personnel in the vicinity at the time, with him and another, unidentified, guard posted to guard the door leading to the Decontamination Chamber. The Joker made his escape through the area, encountering the first two guards at the corner of the Processing Corridor and killing them. He also left sets of wind-up chattering toy teeth in his wake of destruction. The Joker killed a third guard at the door to the Patient Pacification Chamber and then attacked Burlow and the other guard at the door to Decontamination. The Joker snuck up on Burlow from behind and knocked him down on the floor, then killed the other guard with him. The Clown Prince of Crime proceeded through the door to the Decontamination Chamber, setting loose all the prisoners housed in the cells there. Batman finally came through the area once the Joker allowed him access to the Processing Corridor. Batman found the deceased security guards the Joker had left in his wake and fought off two more escaped prisoners who tried to attack him. Burlow at this time regained consciousness, and called Batman over to the Decontamination Chamber door. He was unable to identify his attacker, and could only ask Batman what had happened. Batman filled it in by explaining, "Joker happened. You're lucky to be alive." Burlow reported that the Joker must have gone into Decontamination because the security door was locked from the inside. Their conversation was interrupted by a request for backup over Burlow's radio. It was Zach Franklin, another guard, who shouted that an inmate, Victor Zsasz, had escaped and was on the loose in the Patient Pacification Chamber. Burlow tried to respond but the line was down. He pointed Batman to the Lower Corridor, where Patient Pacification was located. Burlow offered to come with him, but Batman told the guard he worked better alone. Eddie agreed to remain behind and try to get the Decontamination door open. While Batman left for the Lower Corridor, Burlow examined the door's fuse box. In his frustration, he could do little but strike the box with his fist. Zach Franklin and three other guards awaited Batman in Patient Pacification, telling him that Zsasz had killed one guard and taken a second, Mike, hostage. Batman used his stealth skills to sneak up on Zsasz and rescue the hostage.

Harley Quin then appeared on a security screen and informed Batman that she and the Joker were in full control of the asylum and that she had captured the head administrator, Quincy Sharp. Batman escaped Patient Pacification through the ventilation system and appeared in a shaft directly above the Processing Corridor and Burlow, just as the guard succeeded in forcing the security door open. Burlow ran to the Decontamination Chamber, only to arrive at an observation window, through which he could see the chamber filling with a mysterious green gas. At least four asylum guards rushed to the window and pounded on it, silently begging for Burlow to let them out before the gas overcame them. The gas in the area set off a security countermeasure, which detected the toxins and sealed off Decontamination, trapping and dooming those inside. Burlow watched in horror as at least ten of his colleagues succumbed to the gas. Batman arrived on Burlow's heels, and Eddie asked him what the gas in the chamber was. Batman told him it was Joker Toxin and that anyone caught in the Decontamination would be dead. Burlow watched more guards fall through the window and die slowly and painfully, although he remained hopeful and asked Batman, "Are you gonna get in there and help them, Batman?" His optimism rose when Burlow spotted movement inside the Decontamination Chamber. ("I can see people in there! They're still moving!") He also urged Batman to hurry. Batman entered the room via an air duct and found that three security guards and one inmate had escaped the dense gas by climbing to safety. After rescuing them, Batman struck the ventilation system fuse box inside the Decontamination Chamber, causing an extraction system to filter the Joker's deadly gas out of the room. Burlow cheered Batman on, telling the Masked Manhunter that when he found Joker, to punch the villain for him. Burlow further commended Batman for his selfless attempt to save innocent lives, saying, "I saw what you did in there, Batman. You did good." Eddie then found that the door leading back to the Processing Corridor had now been locked back in place. While Batman followed the Joker's trail to the Transfer Loop, Burlow attempted to call for help on his radio. He tried contacting William North, Zach Franklin, Louie Green, and another guard, Bill, but his call failed to go through due to the fact that the Joker had somehow managed to also gain control of the guards' radios. He refused to give up, however, and continued trying: "Hello? Is anyone there? Officer North, Officer Green! Can you hear me? Bill? Are you there? Hello, Hello! If anyone can respond to this channel, please respond. We are trapped, we need help. Hello, Hello? Someone please respond! Joker has escaped and is on the grounds near the Transfer Loop." There was no reply on Burlow's radio; the Joker had directed most of the security personnel, including Louie Green, to Arkham East.

Burlow subsequently exited the area through Decontamination and found his way out of Intensive Treatment. Shortly afterward, Poison Ivy took control of Arkham island using her mutated plants, now grown to powerful and monstrous forms enhanced by the experimental drug Titan. The plants infected Burlow with Ivy's mind controlling spores, and Ivy summoned him to the Botanical Gardens, where she made her lair. She "hired a little extra security" by seducing another guard, William North, with her mind-controlling plant spores and pairing him with a zombified Burlow to act as her personal security, guarding the Flooded Corridor in the Gardens. When Batman arrived to stop Poison Ivy from destroying the island, Ivy cleared the Flooded Corridor for him, then sent out Eddie Burlow and William North to attack Batman. Batman arrived to find Burlow and North waiting with their backs to him. When Batman tried to approach the two security guards, they turned around, revealing a cloud of mind controlling plant spores around their heads. Ivy taunted Batman as the two guards prepared to fight for her. ("I've got myself a little security, Batman. They'll just die if anything happens to me!") With his mind firmly under Ivy's control, Burlow only paid attention to the task she had given him: to protect her from the "evil bat". Burlow prepared to lunge for Batman, shouting, "And we love her!" Faced with no choice, Batman defeated Burlow and North, leaving them senseless on the floor. He continued to Ivy's lair in the Elizabeth Arkham gardens, being forced to contend with more Arkham guards under Ivy's control. Poison Ivy bonded with a Titan-injected plant to battle Batman, who still managed to defeat her. After Ivy's defeat, Burlow revived in the Flooded Corridor, sitting up and complaining of sore minor injuries. With Ivy's spell over them broken, Burlow and North seated themselves on a nearby park bench, where they remained until the Joker's final defeat. Eddie Burlow was among the few guards that survived the Joker's takeover and he returned to his post after the Gotham City Police Department had retaken control of Arkham island.

Eddie Burlow is among the few of the surviving guards from Arkham Asylum to join up with Aaron Cash's Medical Protection Team to aid the medical staff whose goal was to provide Arkham City inmates with medical care. They were helped by Bruce Wayne who via donations provided them with cutting edge body armor and firearms and outfitted the Arkham City Medical Center (based inside a church located near the Solomon Wanye courthouse) with a series of security shutters to keep them safe. He was captured along with the rest of the MPTs and Medical Staff by the Riddler. The Riddler ended up threatening Burlow with the death of the other people hiding in the church, as well as carrying out his threat by stabbing his friend in the leg, should he not allow him to capture his allies. Shortly afterwards, he then had him imprisoned in Two-Face's base of operations, the Solomon Wayne Courthouse, using one of his minions who posed as one of Two-Face's henchmen, and also told to supply Batman with one of Riddler's Enigma boxes and a radio frequency (2-7-5, 3-2-5) should Batman rescue him. He was eventually saved by Batman, and gave him the frequency and box.

He later returns to the Church while Batman is rescuing Medic Adam Hamansaki and can be found there guarding the door protected by the WayneTech security shutters (only opening the door for Batman, the other rescued MTPs, Medics, Vicki Vale, Jack Ryder, and disgraced Mayor Quincy Sharp, and rudely tells Catwoman the church is closed if she tries to gain access). After Batman rescues Aaron Cash and the remaining hostages from the Riddler, Eddie will receive word that they are safe and continues to guard the entrance to the church with M.T.P William North (which is ironic as they end up together again at the end of this game as well, although this time they have more company). 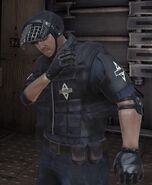 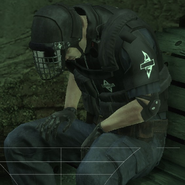 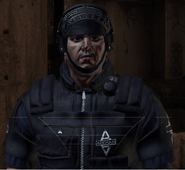 Add a photo to this gallery
Retrieved from "https://batman.fandom.com/wiki/Eddie_Burlow?oldid=213725"
Community content is available under CC-BY-SA unless otherwise noted.