"All I've seen the last few months...the last two nights...has challenged everything I ever believed in. It all comes down to one thing. Ethan. He was right. Gotham needs the Batman." ―Detective Ellen Yin

Ellen Yin is a detective for Gotham City Police Department created for the animated series The Batman.

Ellen Yin is a police detective with the Gotham City Police Department, formerly head of her department in Metropolis PD. She transferred to Gotham PD looking for a challenge (it is implied that she left Metropolis due to Superman's presence there). Yin is a career cop at the top of her game, simple and by the book. She is as physically adept at as any male cop she knows, and has proven to be skilled in hand to hand combat. She was initially assigned as a partner to Detective Ethan Bennett.

Yin quickly grows fond of her partner after being tasked with unmasking the Batman. Having shown to be an effective detective, she gains the approval of Chief Angel Rojas. She had a difficult relationship with the Batman initially, and not warming to his alter ego Bruce Wayne so easily either. Ellen doesn't have it out personally for The Batman. As a vigilante, he's breaking the law, and as Bruce Wayne she only sees a spoiled billionaire playboy, despising his seemingly silver-spoon arrogance. She also thinks Catwoman is similar to Batman. She tried to take down Joker, Penguin and Mr. Freeze, but Batman always beat her to the punch.

When her partner and friend Ethan Bennett is transformed into Clayface, due to Jokers putty. Yin loses one of her best friends in the city. Before she and Batman parted ways after fighting Clayface, Batman handed her a Batwave commlink, telling her to call him whenever she needed. Keeping the commlink, Yin later calls Batman her new "partner" during a coffee shop meeting with Ethan's best friend, Bruce Wayne.

Yin soon decides to test her new partnership with Batman, asking for his help in "The Cat, the Bat and the Very Ugly" as she investigates Catwoman and her mysterious new partner in crime. When Yin discovers that the mysterious partner is none other than the Batman himself, she questions her trust in the caped crusader. She decides to trust him though, after he and Catwoman stop one of Penguin's schemes to hold all of Gotham at ransom.

Her first true mission with Batman as partners came in "Riddled" when the Riddler planted bombs around Gotham, threatening to detonate them if Yin didn't play his "game". The two worked together to solve the riddles, with Batman communicating secretly with Yin through the Batwave. They are both eventually captured by the Riddler, upon discovering his true plans. Yin and Batman were able to break free and foil the Riddler's plan. Riddler later attempts to reveal Yin's partnership with the Batman to Chief Rojas, but Rojas ignores him, calling him a lunatic.

In the episode "Fire & Ice", Ellen attends a charity party hosted by Bruce Wayne. She tells Wayne that she knows his secret, and he initially thinks that she knows he's Batman. However, the "secret" is that Yin realizes that Bruce's "spoiled, arrogant playboy" persona is only a facade.

When her former friend turned villain, Ethan Bennett resurfaced as Clayface, he is apprehended by Batman and receives therapy at Arkham Asylum. He is later cleared for released after he was deemed safe to return to society, as long as he didn't use his abilities. Yin is relieved to have her friend back, but Bennett is still angry at the Joker and seeks revenge. Yin, along with Batman attempt to reason with him, but he loses control, deciding that it was easier to be Clayface than Ethan Bennett. In the end Yin is the one to take him down with a device given to her by Batman, immobilising him. Later Yin sadly says 'we've really lost him this time'.

Yin and Batman grow closer as partners, with each mission together. Yin starts to trust Batman more than her police colleagues, saving Batman from capture by her newly assigned partner Detective Cash Tankenson in "JTV". Yin is unwilling to accept Tankenson's brash behavior, but when he is targeted by the Joker, she fears that she will lose another partner to the Joker's madness, and orders Tankenson to stay away from him. Her new partner refuses to listen however, and becomes Joker's prisoner. Yin eventually saves him with help from Batman. Tankenson later transfers to a desk job, leaving Yin once again with Batman as her sole partner.

However, their partnership did not go unnoticed by the villains of Gotham, drawing unwanted attention to Yin. In "Strange Minds" in order to get his revenge on both Yin and the Batman, the Joker ambushed Yin in her apartment and knocked her out with a gas. He then kidnapped her and held her hostage at a secret location with bombs rigged to blow after eight hours. Batman attempts to save Yin by entering the Joker's mind to find out her whereabouts. Batman is able to save Yin just in time, after tricking the Joker into revealing where he'd trapped her.

Yin worked alongside Batman until "Night and the City", where her Batwave was destroyed by Rojas, and her badge confiscated. Yin and Batman are then briefly on the run from the GCPD, as well as the Joker, Riddler and Penguin. Her badge was later returned by Commissioner James Gordon at the end of the episode, and she was reinstated. Yin no longer appeared after season 2, though it is implied she becomes Police Commmisioner in the near future during the fourth season episode "Artifacts".

Ellen Yin is a young Asian-American woman with brown eyes and long dark hair. She most commonly has her hair in a high-set ponytail. However, she has been known to let her hair down. She is most commonly wears a red jacket with the sleeves rolled up to the elbows, long loose-fitting grey pants, and black shoes. Underneath her jacket, she wears a black short-sleeved t-shirt with a gun holster strapped over her shoulders.

In the episode "Riddled" Yin briefly wears a bomb suit as she tries to disarm a bomb set by the Riddler. In the episode "Tospy Turvy" Yin is sealed in a playing card by the Joker. The card design has a purple royal robe with two white hands, each holding scepters and one of them is upside down. The card also features a crown above Yin's head, which conceals her ponytail and the bottom half of the card has a face of a woman with long dark hair. The Joker calls Yin "Queen of Spades".

Yin in a hazmat suit

Yin struggles to free herself

"Someone is very bright. Step into the light."

Yin on the run with Batman

Yin's secret is discovered by Rojas

Yin responding to a call

Yin sealed in a playing card

"The next time we meet Batman, the mask comes off!"

Yin notices something is wrong 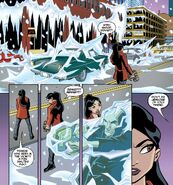 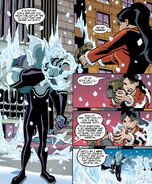 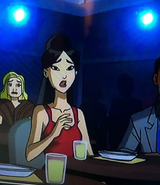 Yin appears in a Scooby Doo movie??
Add a photo to this gallery
Retrieved from "https://batman.fandom.com/wiki/Ellen_Yin?oldid=219322"
Community content is available under CC-BY-SA unless otherwise noted.