"All I did was head up the crew that built the wall around this place. Worked six months, day and night, and look where it got me."
―Ernest Ray[src]

Ernest Ray is a political prisoner in Arkham City. He was contracted by the Gotham municipal authorities to construct the perimeter wall around the detention zone.

When Arkham City was under construction, Mayor Quincy Sharp and the Gotham city council solicited bids from the private sector to carry out the necessary demolition, construction, and architectural planning measures for the new facility. Ray was the head of a construction firm which secured the contract to build the perimeter wall. The project took six months to complete. Arkham director Hugo Strange subsequently ordered Ray's imprisonment under the state of martial law then in effect. Ray's home was raided by TYGER Security personnel and he was committed to the prison city as one of its first inmates. He survived by hiding out with other Political Prisoners in a fortified shantytown, making only occasional inroads into the city streets in search of food.

Ray was searching for food with another political prisoner, Dave, in Park Row when they witnessed Jack Ryder being assaulted by several inmates. Ray and Dave took cover in an alley. They expressed sympathy for Ryder's position but recognized the futility of attempting to aid him. The duo were later confronted and interrogated by Batman, who had recently arrived in Arkham City. Ray begged Batman not to hurt him before claiming that he hadn't done anything wrong. He maintained that his only involvement with Arkham prior to his arrest was supervising work on the prison walls. Batman expressed surprise Ray had survived so long, to which the latter responded that he stayed out of sight and didn't bother the other inmates. Batman assured Ray that he would be closing Arkham City for good before leaving.

If interrogated further, Ray mentions that he has been in Arkham City for over three months. He and the other political prisoners had resorted to scavenging and eating stray animals to survive. The Arkham administration carried out routine food drops, but most of these supplies landed in gang turf and were claimed by the Joker, Penguin, or Two-Face, respectively.

It is unclear whether Ray survived the subsequent gang wars and Protocol 10; if so, he was likely released once the Gotham City Police Department retook control of Arkham City. 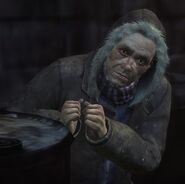 Add a photo to this gallery
Retrieved from "https://batman.fandom.com/wiki/Ernest_Ray?oldid=198226"
Community content is available under CC-BY-SA unless otherwise noted.