The Batman
Ethan Bennett was a Gotham City Police Detective before he was driven insane by the Joker and transformed into Clayface.

Ethan Bennett was one of the most respected members of the GCPD, and Bruce Wayne's best friend. Whereas his partner, Detective Ellen Yin, saw things in black and white, Ethan saw the gray in almost everything, and was more willing to allow Batman to co-exist with the GCPD. In fact, Ethan often found himself wondering if the caped vigilante he was pursuing was actually helping the city. During most of Season 1, Ethan defended Batman and his actions, while Yin often disagreed, even considering Ethan's defense statements further confirmation that Batman was a vigilante.

He and Yin worked on stopping Joker, Penguin, Mr. Freeze and Man-Bat during their first appearance in Gotham. but Batman would always arrive to beat them first. Secretly though, Ethan actually advocated the Batman’s ability to clean up the streets of Gotham. He was even captured by Man-Bat and planed to be killed before Batman saved him. One time He was lured into a trap by Joker and planed to be tossed in the river along with every other powerful authority in Gotham. Thankfully Batman saved them.

Soon in "The Rubberface of Comedy", Ethan's superior, GCPD Chief Angel Rojas, ordered the entire police force to take down every masked and costumed "freak" in Gotham City. Ethan protested, defending Batman as an asset to the city and credited him with helping to capture Joker. In response, an infuriated Rojas threatened to suspend Ethan, and told him to figure out where his loyalties lain. Ethan decided to prove that he's a good cop, and attempted to take down Batman, but during a scuffle with Joker, both Batman and Joker escaped. Later, when he investigated a break in at a museum, Ethan was captured by Joker, brought back to his hide-out, and subjected to psychological torture, which drove him to the brink of insanity. Yin and Batman rescued Ethan, but not before he was exposed to Joker's "Joker Putty" Formula; and inhaled it. Ethan began to immediately cough, and the formula took effect.
(When the "Joker Putty" touched a surface, it turned it to just that: a malleable putty. Joker was about to spray Ethan with it, and said that he wanted to know what it did to humans, when Batman knocked it out of his hands with a Batarang, and caused Ethan, still tied to his chair, to inhale the fumes.) Batman captured Joker, who taunted Ethan as he was taken away saying have a rotten day. When Ethan told the media that Batman saved him and caught Joker, Rojas suspended him. At home, a depressed Ethan, still sick from the Joker Putty fumes, turned on the shower, and the hot mist in the room allowed the putty to take full effect, and Ethan's skin melted.

In "The Clayface of Tragedy", Ethan, horrified by his transformation, and unable to speak clearly (due to his throat full of clay) sought help in the city, but was attacked by the police, who used a fire hose to wash him down a drain. Ethan then kidnapped Rojas and attempted to kill him, but was foiled by Batman and Yin. Ethan demonstrated his ability to shape shift and mimic voices, and claimed that he could be anyone that he chose. Yin and Batman tried to reason with him, but Ethan claimed that Joker "didn't just melt my body, he melted my mind. I'm a freak inside and out!" After a fight with Batman, Clayface nearly killed him, but was stopped by Yin, who begged him not to cross the line and get blood on his hands. Clayface turned back into Ethan, and commented that he never thought he'd see Yin defend Batman, before he sadly asked: "Yin, what's become of us?" before he allowed himself to melt down a drain. During a talk between Bruce and Yin in a diner, Ethan appeared for a few seconds, and the two ran after him. However, Ethan disappeared before they could find him. They commented: "He could be anywhere. He could be anyone..."

In "Meltdown", Clayface went to Arkham Asylum to kill Joker, but Batman stopped him by freezing him in place, unfortunately letting Joker escape from Arkham. Clayface later went on trial for his crimes, with Professor Hugo Strange giving him a clean bill of mental health. Ethan was put on probation: if he used his powers again, he would be put back in Arkham. Clayface became Ethan Bennett again, and got a job from his best friend, Bruce Wayne.

When Joker broke out of Arkham to wreak chaos, Ethan became determined to save others from his fate, and became Clayface again in an attempt to stop the Clown Prince of Crime. At first, he and Batman worked together to bring the crazed super-villain down, but after Batman confronted him for his violation of court orders, Ethan felt betrayed and nearly killed Batman until Joker convinced him to become a criminal. He became Clayface permanently and was put back at Arkham.

In "Grundy's Night", a Swamp Zombie known as Solomon Grundy, an old legend, attacked Gotham on Halloween. It soon turned out that he's really Clayface in disguise. Batman and Clayface fought in a wax museum where Batman defeated him and Clayface was sent back to Arkham.

The character was incorporated (to a limited extent) into The Batman Strikes! comic book series after his appearance in the animated series.

In the comic book, Clayface pulled a stunt similar to turning into Solomon Grundy and turned into Catwoman to frame her for his robberies. Afterward, Clayface began a series of "copycat crimes" based on cases that he solved as a detective. In "Hit and Run", he turned into Joker and stole the Batmobile to get Batman to find Joker's hideout so that he could get his revenge. In "Escape," Clayface was manipulated by Hugo Strange to steal a chip that would help him get rid of the "voices" in his head. However, Strange used it to control him, and turned him into a giant that was designed to wreak havoc on the city. He was eventually freed by Batman, and the two worked together and stopped Strange.

In "Clayfaces", Ethan promised to give up his life of crime to use his powers for good. Ethan seemed to have finally reformed. He tracked down and captured Joker, by disguising himself as the Joker's henchmen: Punch and Judy. Ethan handed Joker over the police without using excessive force, and turned himself into the authorities, who took him to Arkham Asylum. However, Ethan did not completely regain Bruce's (and Batman's) trust. He was eager to leave Arkham and continue working as a police officer, although Batman refused to consider that request until Ethan was cured, and cited that he could easily go back to crime. Ethan then fought a Second Clayface. Together, Ethan, Batman and Robin confronted Basil Karlo, the new Clayface. At the end of the episode, Ethan was cured from his condition when Batman fired an antidote into the two, and he was taken away to Arkham. While Ethan was completely cured of his mutation, Karlo still retained his powers.

In "Artifacts", it was stated by police dispatch that Ethan was permanently cured, and became the new Chief of the GCPD in the year 2027. 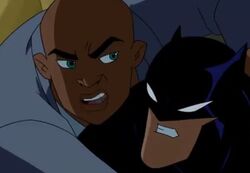