Batman Wiki
Register
Don't have an account?
Sign In
Advertisement
in: Villains, Arkham Asylum patients, The Society Members,
and 5 more

Expert in pyrotechnics and explosives, wears a heat-insulated and fire-retardant battlesuit outfitted with a Jetpack and numerous incendiary weapons

Crispin Freeman (voice)
Garfield Lynns, also known as Firefly, is a pyromaniacal serial-arsonist in Gotham City. Garfield was originally a pyrotechnics expert who lost his job and turned to crime, carrying out arson attacks and torching huge parts of Gotham in the process. However, one day, when Garfield set alight to a chemical factory, it raged out of control, and he was horribly scarred all over his body. Upon recovering,, Lynns made a special flame-retardant and heat-insulated battlesuit and numerous incendiary gadgets and weaponry- including a military-grade flamethrower, jetpack, napalm, launchers, and a self-designed flame sword for close-combat purposes.

Garfield Lynns was originally a pyrotechnic expert for motion pictures, but became a victim of Gotham City's severe poverty and turned to crime, displaying signs of pyromania. Lynns was captured by Batman and Robin after his first robbery. Lynns took up arson as a hobby, but it soon turned to an obsession; he believes he can see visions in the flames. Inspired by actual fireflies, he built a suit and became a professional arsonist. Early in his criminal career Firefly became the protégé of Killer Moth, looking to duplicate the success of crime-fighting duo Batman and Robin. The alliance fell apart when Killer Moth realized the full extent of Firefly's madness and feared for his well-being.

Once Bane broke the criminals out of Arkham Asylum. Firefly's plan was to burn down all the places he didn't go to as a child. These plans were furthered by Joker and Scarecrow forcing the mayor to cancel the firemens' pensions. In consequence the fire service went on strike. Firefly burnt down his first target and escaped when Batman arrived. When he burned down his second target Batman arrived again and Firefly escaped from him again. At his third target, Gotham Zoo, Batman arrived again and their fight ends up on a bridge where Batman captures Firefly and leaves him hanging on a bridge over the crocodile exhibit.

In a recent attempt to burn Gotham to the ground, Firefly was horribly burned when a chemical factory he set erupted in an explosion. Ninety-percent of his body was burned, and he began his recovery in Blackgate Prison.

At some point afterwards, he was made a member of Black Mask's Gang, beating out his arsonist rival, Firebug.

He made a short appearance in the JLA story arc "Crisis Of Conscience" (JLA #115-#119) fighting Catwoman in Gotham City over a diamond before Batman turned up. Although an epic battle between the Secret Society and the Justice League ensued, Firefly was knocked out and stayed down during the entire battle.

He made another short appearance in the 2005 mini series Villains United, when the Secret Six attempted to escape the Society's grasp.

Firefly was among the numerous heroes and villains apparently slain by the OMACs in the pages of DC's The OMAC Project, though he later managed to survive and appeared alive in Villains United: Infinite Crisis Special.

In the Gotham Underground limited series, he allies himself with Killer Moth, Lock-Up, and Ventriloquist II in an ill-fated attempt to kill the Penguin when the Scarecrow reveals that the Penguin is secretly in the employ of the Suicide Squad.

In the New 52's Nightwing series, Garfield Lynns is a known pyromaniac, though only a small-time criminal. Rather than becoming Firefly, he was instead killed by Ted Carson, who used his body to fake his death and used him as a scapegoat to his crimes as Firefly. Nightwing and Batgirl soon discovered the truth and subdue Carson.

In his recount of the War of Jokes and Riddles, Batman recalled that Lynns was actually the first Firefly, hereby retconning Carson to be the second. He took part in the battles, siding with the Riddler's crew. Firefly was among the villains subdued by Batman and Kite Man.

Following a later rewrite of history, Lynns returns from the dead and begins working alongside Carson. In the aftermath of Fear State, he leads an attack on the Billionaires Ball, hiring henchmen to disguise themselves amongst the guests and stealing Mr. Freeze's gun from Arkham's ruins to use in the heist. However, Batman infiltrates the party and subdues the group, using the Freeze Gun to disable his flamethrower.[1] 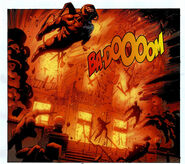 Firefly as he appeared in Batman: Arkham Origins

Firefly first appears in The New Batman Adventures voiced by Mark Rolston. He appears in the episodes "Torch Song" and "Legends of the Dark Knight". Firefly also appears in the Justice League episode "Only a Dream".

Firefly appears as a recurring villain in The Batman, voiced by Jason Marsden.

Firefly made a cameo appearance in the Batman: The Brave and the Bold episode "A Bat Divided!" among many other villains at the "8 Bar", a haunt for third-rate costumed criminals in Gotham City. The bar was crashed by three atomic counterparts of Batman, as well as the hero Firestorm. Vaulting onto a table, Firefly charged one of the Batmen, making the mistake of panicking on high ground. The doppelganger Batman simply pulled the legs of the table out from under the villain, sending him crashing to the floor. Firefly was far from defeated, however, rising up with his fists to rejoin the barrom brawl. One of the Batmen then hurled Firefly across the bar, where he crashed directly into a wall. Lynns proved to be the last villain standing, however, attempting to sneak up behind another Batman counterpart after all of the other defeated villains had beaten senseless on the floor. The Batman he targeted, however, sensed Firefly behind him and slammed his fist backwards into Garfield's face, before flipping him over his back and onto the floor. Firefly also appears in the beginning of "Emperor Joker" before the intro, but is easily defeated by Batman and Robin.

Garfield Lynns appears in the first season of Arrow, played by Andrew Dunbar. The show depicts him as a former fighterfighter and crew of "the Fireflies", who was left for dead during a tower fire. Seeking revenge, Lynns targets his former comrades. He is eventually stopped by "the Hood", after which he commits suicide by walking into the flames.

Firefly will serve as a villain in the upcoming film, portrayed by Brendan Fraser.

Firefly makes an appearance as the first level boss in the NES video game Batman, which is based on the 1989 film. He is fought in front of Gotham's City Hall, and flies back and forth the top of the screen, occasionally dashing down in an attempt to tackle the player. His main method of attack is shooting several fire balls from above.