"Gentlemen! Let's broaden our minds."
―The Joker to his Goons[src]

The Flugelheim Museum was Gotham City's most prestigious art gallery.

That was the location where the Joker had arranged a meeting with Vicki Vale and also where the first encounter between Batman and the newly 'reborn' Joker occurred. The Joker caused the deaths of many innocent people there and did serious damage to the paintings.

"All the buildings, except the cathedral, are dwarfed by the geometric savagery of the Flugelheim Museum whose brutal exterior is more akin to locomotive design than an art gallery like the Guggenheim"
―Anton Furst[src]

Furst was insistent that his draftsman, Nigel Phelps, include the architectural designs of Shin Takamatsu in his conceptual drawings, much like the Monarch Theatre. 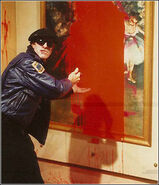 One of the Joker's Goons vandalizing a painting at the museum. 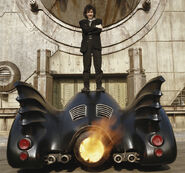 Tim Burton atop the Batmobile. 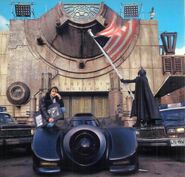 Anton Furst and Carl Newman in the batsuit, waving the American flag.
Add a photo to this gallery

Batman (1989 Movie Comic Adaptation).
Add a photo to this gallery
Retrieved from "https://batman.fandom.com/wiki/Flugelheim_Museum?oldid=208920"
Community content is available under CC-BY-SA unless otherwise noted.