Gotham City was a large metropolitan city based on the Eastern Seaboard. It also serves as Batman's main area of operations. Though his presence lead to the rise of many supervillains within the city over the years, the Dark Knight would eventually rid of crime in the city, with the help of his allies and the GCPD.

Gotham City was founded in the mid-1600s by Scandinavian settlers, who endured harsh winters and conflicts with the local tribe, the Miagani, to build the city. Eventually, the British took over the settlement.

In the 1800s, the city quickly grew with the influence of Judge Solomon Wayne and architect Cyrus Pinkney. These were also developed by print mogul Henry Cobblepot, who also hired Pinkney and began a tense rivalry with Wayne. After finishing work on Arkham Asylum, Pinkney was apparently poisoned by Cobblepot but survived by using a remedy provided by Amadeus Arkham, though faked his death to avoid him. Weeks later, the mogul was killed in an apparent accident.

Around this time, warlord Ra's al Ghul arrived in Gotham and, through bribing the city council, founded Wonder City. Utilizing a hidden Lazarus Pit for power, he created futuristic technologies to rid crime in the area, intending to eventually rid of the element over the world. However, the Pit began affecting many civilians, turning many insane and leading to large increase in street crime. After Ra's fled the city, the council built over Wonder City, vowing to forget about its presence.

Map of the explorable areas of Gotham in Arkham Origins. 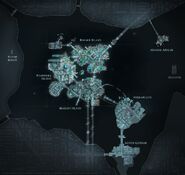 A fanmade map of Gotham
Add a photo to this gallery
Retrieved from "https://batman.fandom.com/wiki/Gotham_City_(Arkhamverse)?oldid=214742"
Community content is available under CC-BY-SA unless otherwise noted.