Batman Family
Grapple Guns are hi-tech pistols that fire small grappling hooks on monofilament wire. Once the hook is secure, a button press will activate a powerful motorized pulley system that will allow the user to make a quick ascent to a higher point, such as a rooftop. They can also be used offensively to pull people or objects, sometimes through attachments like the Batclaw. Variations of this gadget are used constantly by Batman and the rest of the Batman Family.

The Grapple Gun has become their most indispensable tool. With it Batman and his associates can scale ascend buildings in the absence of flight. But one means is as a means of travel, by swinging off of a fired line. They can slowly descent from high heights or save themselves from a fall or drop. They can use the grapple to grab objects or people. In desperation they can fire the grapple as a nonlethal projectile weapon.

From his debut, Batman did not use grapple guns, usually making use of the Batrope. In addition, he would often make use of Batarangs as grappling hooks, using them to latch onto objects. However, early versions of the gun-fired grappling ropes appeared throughout Batman comics prior to high-tech versions' debut. These included Batpoon in World's Finest Comics #9, Suction-Cap Climbing Ropes in Batman #183, and a Harpoon Rifle in The Dark Knight Returns. However, none of these featured motorized pulley systems and Batman would physically climb the ropes once fired. Additionally, the character would rarely used such devices more than once, with them usual being abandoned after their first appearances.

In Justice League of America #196, Batman, after being stunned mid-swing by Signal Man, used a spring-fired rope to escape a fatal fall. Some point to this as one of the first uses of a grapple gun in the comics, though this did not feature a motorized-pully system and used a batarang as its grapple hook. The gadget itself was shaped a cylinder-shaped tool rather than pistol.

Several superheroes, such as Sandman and Rorschach, made use of pistol-fired climbing ropes, though these were often lacked the pully-systems.

During the 1989 film, Batman made use of a "spring-action reel" with multiple attachments. These ranged from a spear-gun that shot barbed hooks, which would pull their targets towards the user with a detachable cord, and a grappling hook with wire. The latter could be attached to the reel to escape situations. The reel itself could be used to swing or rappel to areas, provided the rope was attached to something. Batman would often use it attached to his Utility Belt, though it could be used without it. Several other cord-based guns were also used in the film, such as a Bola Launcher and the Foefie Gauntlet. Many regard this as the debut of the modern grappling guns, particularly with the motorized grappling-reel variants.

After the popularity of the 1989 Batman film, artists and writers began expressing interest in implementing grapple gun into the Dark Knight's arsenal. According to some creators at the time, DC forbade the use of such devices, believing that it would be better to let the Burton film's popularity pass before implementing the gadget. This was also due to Batman's refusal to use guns, something that had been firmly in place since the Post-Crisis continuity started.

However, during Batman #441, the character uses a square-shaped tool to fire a grappling rope and climb it. In the later Batman #458, a gadget was used off-panel to fire a rope for Batman to swing on. These two appearances are widely considered the first appearances of the grappling gun in the comics. In addition to the pully mechanisms, they were used to create ropes that Batman would use to swing between rooftops.

When Jean-Paul Valley took over the Batman identity during the Knightfall, he implemented wrist-mounted grappling hooks onto his gauntlets. As well as allowing him to rappel up buildings, it could be controlled to voice commands. However, the gadget was abandoned after he was forced to give the Batman identity back to Bruce Wayne.

In Burton's sequel to Batman, Batman is depicted using the Spring-Action Reel and Speargun attachment to incapacitate the Terrifying Clown. The gadget retains the same design as Batman, though with minor changes and new components. Production and promotional material refers to this as "the Speargun Grapple" due to a similarly named gadget called the Zip-Line Grapple.

In Batman Forever, Batman makes use of a redesigned Grapple Gun in the opening battle, using it to swing the vault Two-Face stole back into the Second National Bank. After equipping the Sonar Batsuit, he makes use of wrist-mounted grappling hooks to save Chase and Robin during the Battle on Claw Island. In Batman & Robin, the wrist-mounted grapples are used by the Bat-Family to ascend the Gotham Observatory. However, Batman is also depicted using a redesigned version of the grapple during the confrontation.

Christopher Nolan's Batman film trilogy depicts Batman using a grapple gun in both Batman Begins and The Dark Knight. In the trilogy, it is depicted as an abandoned Wayne Enterprises project which Bruce repurposed for his crusade. Similar to the Burton films, the gadget can be attached to the Utility Belt's buckle to act as a motorized reel. It is also used at several points to pull people and objects towards him, though it is unknown whether this is possible through a separate attachment. Batman can also separate the rope and use it to hang enemies from objects, as he does with Joker after their confrontation in the Skyscraper.

In "Snyderverse", the Grapple Gun is depicted as a gadget Batman created himself. The gun is used in combat more frequently than its other live action counterparts, being used to either throw objects at opponents or pull enemies to Batman. It also comes equipped with the reel in the gadget, meaning Batman does not need to attach it it to his utility belt to ascend to areas, while the gun's grappling hook is depicted to be strong enough to penetrate objects, such as wooden support beams. The grapple gun also features a hammer on the butt, which Snyder claims allowed it to be used in close-quarters combat. A second armored variant is also used in Batman's fight with Superman, which allowed Batman to grab and throw the Man of Steel through objects.

In Matt Reeves's film, a collapsible grapple gun is implemented into the Batsuit's gauntlets. The gadget is deployed as a spring-mechanism into Batman's hands, which allows him to quickly access it. The grapple is used as both a traditional escape/ascension tool and a defensive weapon.

The Grapple Gun appears frequently in Batman: The Animated Series, with both Batman making use of it frequently. The line can also be electrocuted, allowing Batman to stun enemies. However, both he and Robin also make used of the traditional Roped-Batarangs.

The Grapple Gun appears in various Batman media tie-in games, notably the Genesis version of Batman: The Video Game and The Adventures of Batman & Robin: The Video Game. It is often depicted as a a method to swing to platforms or pull the player-character up to high ledges. Several games, such as the 1989 Batman arcade game, also allow the Grapple Gun to be used as a weapon.

In the LEGO video games, the Grapple Guns can be used to either hook onto LEGO grapple points or pull objects towards the player. In both LEGO Batman: The Videogame and LEGO Batman 2: DC Super Heroes, Batman and the Bat-Family are the only characters able to user these. However, in later LEGO games, characters like Joker, Catwoman and Penguin will come equipped with their own grappling hooks and gadgets.

In the Batman: Arkham games, Batman make use of a "Grapnel Gun", which allows him to ascend to ledges and areas out of climbing distance. The grapnel is also used to swing between vantage points and, after unlocking "Inverted Takedowns", can detach the rope to hang enemies from these. The games also feature the Batclaw, an attachment that allows Batman to pull enemies and objects towards him. The grapnel can be activated by aiming the camera at the target ledge and pressing the right-shoulder button in all games. The Batclaw, however, must be selected through the D-Pad and aimed like other gadgets.

In Batman: Arkham City, Batman can equip a Grapnel Booster after completing the four basic AR training missions. This projects him at high-velocity speeds over the grappled ledge and allows him to break into a glide after reaching the target area. Batman can also now use the gadget whilst running or gliding. These functions are also retained in the prequel Batman: Arkham Origins, though the booster is replaced with a slower prototype variant called the "Grapnel Accelerator". In Batman: Arkham Knight, the Grapnel retains the same functions as in previous games, though its Grapnel Boost can now be upgraded to up to four levels. The gadget can also be chained to climb up buildings with multiple ledges, most notably Wayne Tower.

Batman uses Grapple Guns frequently in both Batman: The Telltale Series and Batman: The Enemy Within. The tools retain the same functionality as other counterparts, though they are connected the Batcomputer to deactivated if stolen. If the player does not stop Penguin hacking the system in "Guardian of Gotham", the grapple is rendered operational by the criminal's actions, forcing Batman to become more reliant on his acrobatic abilities. In The Enemy Within, Batman also begins using a wrist-mounted variant called the Bat-Anchor, a dual-hooked grappling line fired from the Batsuit's wrists. The hooks will pull the objects they're attached to towards each end, including heavy duty object and machinery.

The Riddler has has his own version of a grapple gun 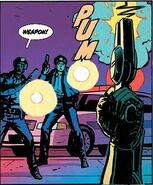 Future State: The Next Batman #1

Batman, the first appearance of the Grapple Gun 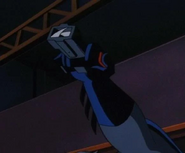