Before his parents' deaths, Bruce often watched The Gray Ghost on television with his father. The dynamic costumed vigilante helped shape the vigilante persona Bruce Wayne adopted later in his life, the cape and cowl of Batman.

Decades later, however, Simon Trent was little more than a washed up, typecast actor. Unable to pay his rent, he slowly sold his Gray Ghost memorabilia to cover the bills. Frustrated with his life, he regretted his decision to ever play The Gray Ghost, destroying the few pieces of the collection he had left. However, fate, chance or perhaps just very careful planning brought Batman into contact with Trent. Though he was investigating a bombing spree similar to one depicted in The Gray Ghost, Batman revealed to Trent the importance and influence the character had on him in his early years. Trent, himself, would, upon seeing the Batman's personal collection of Gray Ghost merchandise, say that playing the Gray Ghost wasn't all for nothing, glad that what he had done had a positive influence. Trent redeemed himself, donning The Gray Ghost persona once more, and aided Batman in unraveling the mystery of the Mad Bomber. The Bomber turned out to be a toy collector who used Trent's memorabilia to re-enact an episode of The Gray Ghost.

Shortly thereafter, a major home video release of the long lost TV series was made from Trent's personal film collection, likely making him a wealthy man. During a public video signing (in costume), Bruce Wayne acquired Trent's autograph and subtly revealed to his hero his own secret identity, which pleased Trent to no end.

Gray Ghost comes out of retirement to aid Batman 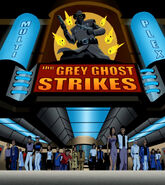 Clayface as a Gray Ghost statue