None
Harold Allnut was Batman's trusty engineer and the resident mechanic of the Batcave.

Harold has two major disabilities: he is mute therefore cannot speak, as well as having a misshapen body, much like a hunchback, even his own mother being repelled by him. Nevertheless, he has proven to be very gifted in terms of technology and electronics. Harold first appeared in The Question #33 (December 1989), where he was expelled from his house in Gotham City, and ended up in Hub City. His first appearance in a Batman comic was in Batman # 448 (early June 1990), which was Part 1 of The Penguin Affair. He was taken in as a henchman for the Penguin, who coaxed Harold into building deadly machines, which the Penguin used to conduct a massive crime wave through Gotham City. Penguin had the machines moved to Arctic Enterprises, a company secretly owned by Penguin in order to auction it off to terrorists from all over the world, telling Harold he should be prouder than a peacock, assuring him the two would split the money from the auction. However, Penguin secretly planned to get rid of Harold as soon as the auction and demonstration was over, which he revealed to his henchlady Lark. When the auction began however, the Penguin could not find Harold anywhere, as a betrayed and heartbroken Harold had overheard Penguin and Lark's conversation. Penguin attempted to begin the bidding with the terrorists, but Lark still could not locate Harold, forcing the Penguin to operate the machinery to the best of his knowledge. But Batman crashed the auction in the Bat-Copter, Harold turned against his feared master,and saved Batman from a flock of the Penguin's birds. As he rushed at Penguin,the villain demanded bitterly, Who took you into his nest? Who preened you? Who despised you every second that he pretended to be your friend?!? Penguin knocked Harold down with his umbrella, and demanded if he was surrounded by traitors. Batman arrived and captured the Penguin, while Harold ran away and hid in the Penguin's chalet to be alone. Later, while Batman was fighting off Penguin's goons one night, he found and saved Harold.

Batman then gave Harold a home and tried his best to befriend Harold. Harold soon enjoyed building a home for himself in the Batcave to become Batman's personal mechanic. It is in the Batcave that Harold spends his days eating his meals served by Alfred Pennyworth, playing with Ace the Bat-Hound, and watching his favorite television show, Calistoga. During the Knightsaga, Jean-Paul Valley displaced him, along with Ace and Robin, from the Batcave. He managed to sneak into a hidden section of the cave and work there, eventually aiding Nightwing, Robin, and Bruce Wayne to retake the Mantle of the Bat. He then became Batman's full-time technological aide and is the one who designed Nightwing's newest costume.

When Gotham was struck by an earthquake and the Batcave demolished, Harold wandered off into the city. Seeing the desolation, the mute mechanic got to work trying to "fix things" as best he could. Harold vanished from Batman's life for some time after this, eventually returning as a pawn of Hush. The villain had used his gifts as a surgeon to repair Harold's mangled body and restore his voice. In return, Harold had reluctantly helped him in his plot against Batman. When a guilty Harold tried to warn his former friend of the danger, Hush shot and killed him. After Hush was defeated, Batman buried Harold on the hilltop overlooking Wayne Manor, where his house once stood.

After the DC Universe was reset in the Flashpoint event, Harold's life was restored. His surgery and complicity in Hush's schemes are also mitigated. Harold takes residence in his family's old farm, using an abandoned aquaduct to ship Batman's equipment to the Batcave. Batman and Duke Thomas visit him in All-Star Batman #3, where he helps treat Two-Face and transportation to avoid assassins hired by the Black and Whites.

Harold was a man of incredible intellect, and an extremely gifted technologist. 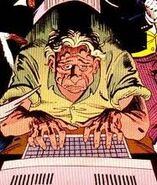 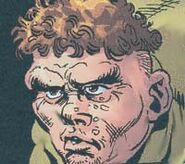