Harriet Cooper was portrayed by Madge Blake in the Batman (1960s series).

Harriet Cooper became one of Gotham City's elite as her nephew Dick Grayson became the ward of millionaire Bruce Wayne. She devotes much of her time to work with community groups, such as the Gotham City Film Decency League. She is also a member of the Gotham City Gourmet Society, an organization she is quite active in. For instance, at one time she was in charge of their annual tea-tasting. But being a well-rounded person, she is a baseball fan, and also enjoys a good boxing match.

It is well known that she is a huge fan of Batman and Robin; everyone at the Gotham City Ladies Bridge Club has heard about the time she received a kiss from the Dynamic Duo. At around the same time as Batgirl's entry onto the Gotham crimefighting scene, Harriet embarked on a long journey to New Hebredes, followed by a North Cape cruise.

Unlike the comics which had traded Alfred for Aunt Harriet, the Batman television series and associated 1966 movie featured both Alfred and Aunt Harriet as regular characters, although Harriet's participation reduced over time due to actress Madge Blake's declining health. During the show's third season (1967-1968), she appeared in only two episodes. 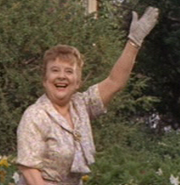 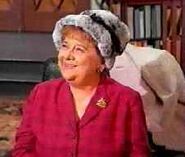 Harriet having tea with Bruce and Dick