Henry Smith was a security guard attempting to resist the Joker's takeover of Arkham Island.

Smith was a member of Arkham's security staff for several years.

Henry Smith was posted at the Intensive Treatment Center to guard the Joker during his transferral. Like many of the other guards, Smith presented much displeasure at watching the evil clown return, remarking dryly as an elevator carrying the Joker and his guards reached his post: "Our 'guest' has arrived." He opened the elevator door for Batman, who was escorting the Joker through the facility, while three other guards kept assault rifles trained on the grinning madman.

Smith followed Batman and the Joker to the Transfer Loop, growling to the Joker, "So, you're back. You killed three of my crew when you busted out of here." This prompted the Joker to respond as if provoking Henry, expressing mock surprise: "Only three? I'll be sure to try harder next time. What say we aim for a hundred?" Smith paused with a grim expression, and Batman and the Joker's escort continued to the reception area of Patient Handover. After watching them leave, he added to himself, "I've been looking forward to [the Joker]'s return. He's not going anywhere."

During the Joker's takeover, Smith made his way back to the elevator in the Secure Transit area, where he tried in vain to operate it. Unknown to him, another guard, named Frank Boles, who sided with the Joker after his escape, had been instructed to kidnap Commissioner Gordon, to whom he had brought into the care of Harley Quinn. The trio had used the elevator, and rendered it unusable for Smith. Smith tinkered with the controls in frustration, demanding aloud to know what was wrong with it. Batman, meanwhile, was able to pick up traces of Boles' favourite tipple on the Arkham air and had begun following it in the hopes that it would lead him not only to Boles but to Gordon himself. Batman shortly arrived at the elevator, following Boles' trail.

He came across a frustrated Smith, who cursed that the elevator was "stupid and unreliable". Upon seeing Batman, Smith demanded to know how Joker had gotten free and what was going on, breaking Batman's concentration despite the Dark Knight's order for Smith to remain silent. Batman soon deduced by the trail that Boles had left in the elevator, now hopelessly jammed. As Batman studied the trail, Harley Quinn landed on the elevator box, taunting Smith and Batman, and informing them that the Joker did not want them to be followed yet. She then detonated a bomb on the elevator, sending the box crashing toward the ground. Batman yelled for Smith to get down, as the dazed guard could only stare in horror when the severed elevator box hurtled toward him.

Shoved out of the way by the Dark Knight, Smith was saved as Batman took the brunt of the blast's effects himself when the elevator crashed. Smith staggered to his feet, although only able to ask what had happened. As Smith picked himself up, Harley Quinn laughed at Batman, saying that he could not follow her and he was trapped down there until her and the Joker were ready for him. Rubbing his sore head, Smith seated himself in a nearby wooden chair, still dazed by his close brush with possible death. When further approached by Batman, Smith noted that "I take it this is Joker's doing", to which Batman responded, "Who else?"

A furious Smith's attitude toward the Joker was apparently further hardened by his most recent encounter with Harley Quinn. He displayed this as he spoke with Batman, calling Joker a "monster" and storming that he had been lobbying for the villain to be put on death row for his crimes. Batman told Smith to calm down as the security guard regained his composure, assuring Smith that the Joker would be apprehended.

Henry Smith survived the attack on Arkham was seen alive in the Medical Facility and returned to his duties after the Joker was placed back in custody. 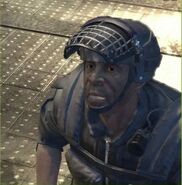 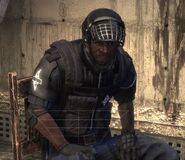 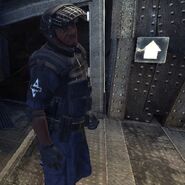 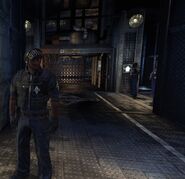 Retrieved from "https://batman.fandom.com/wiki/Henry_Smith?oldid=214670"
Community content is available under CC-BY-SA unless otherwise noted.