The High Security Henchman is the average maximum security prisoner at Blackgate Penitentiary. He, along with many others, are identified mainly by their orange and red jumpsuits and iron restraints that conceal their faces. High Security Henchmen are silent killers that rely on their knives in doing the Joker's dirty work. Hardened convicts transferred to Arkham Island from Blackgate, these human scum remain fiercely loyal to the Joker and his accomplice-in crime, Harley Quinn.

The High Security Henchmen are the knife thugs in Batman: Arkham Asylum. Since they carry knives and will block most of Batman's attacks, Batman must perform a Cape Stun on them (hurling the weighted ends of his cape at the convict to disorient him) to daze them before they can use their knives, then perform a Critical Strike followed by a Ground Takedown (Pummeling them with his fist before they can get up), or you can just redirect over them to avoid taking damage from them before you cape stun and attack them. In most of the challenge maps and battle rooms, the High Security Henchmen are armed with their trademark knives. However, during stealth missions, the High Security Henchmen are not beyond utilizing riot shotguns against their prey. During the Scarecrow's challenge map where Batman must, under the influence of the Scarecrow's fear gas, battle hordes of reanimated skeletons without taking a single hit, High Security Henchmen appear as knife-wielding skeletons.

There were numerous High Security Henchmen imprisoned at Blackgate Penitentiary. A 'mysterious' fire at the prison forced authorities to transfer the convicts to Arkham Asylum. There were a large number of these High Security Henchmen among the dozens of Blackgate convicts housed in the low risk patient cells at the Intensive Treatment Center. Shortly after the High Security Henchmen were transferred to their cells, the Joker was recaptured by Batman after attempting to hold the mayor of Gotham City hostage. Batman returned the Joker to Arkham Asylum to be sent back to his cell. A team of heavily armed and armored security guards escorted him to the Holding Cells, where the Joker broke free as he was taken back toward his cell by a guard and a doctor. After killing them both, the Joker made his escape with the help of Harley Quinn, who had taken control of Arkham's security systems from the inside. He then released all the Blackgate convicts housed in the Holding Cells. The Joker proceeded through the Processing Corridor while Batman attempted to recapture the escaped prisoners. After killing four guards in the Processing Corridor, the Joker made his way to the Decontamination Chamber. At the same time, Harley Quinn unlocked all the cell doors throughout the Intensive Treatment Center, releasing all the High Security Henchmen. Three of them assisted the Joker in battling an army of Arkham security guards in Decontamination. But the Joker betrayed his own men, releasing several canisters of deadly Joker Toxin gas into the room. The gas attacked the nervous systems of its victims, causing a slow, painful, death. The three High Security Henchmen present were overcome by the deadly gas and killed. The only survivor among the convicts was a prisoner who managed to climb to the roof of a nearby office to safety. The remaining High Security Henchmen left with the Joker into Arkham North after overpowering the security guards. When the Joker seized Arkham West and took over the Medical Facility, he left a gift-wrapped present with a High Security Henchman hidden inside it for Batman during his arrival. As Batman approached the large purple present sitting in the middle of the floor of the Medical Facility, it burst open, and the High Security Henchman sprang out, his knives at the ready. Batman defeated him and noticed the sets of gag chattering teeth toys wrapped with the henchman. The Joker continued to dispatch these loyal thugs in prison jumpsuits to harass Batman along the way. Despite their best efforts, Batman defeated all of them sent against him. The remaining High Security Henchmen were rounded up by Arkham's remaining security forces as the Gotham City Police Department succeeded in retaking Arkham Island following the Joker's final defeat at the hands of Batman.

The following is a list of all the High Security Henchmen that have appeared in Batman: Arkham Asylum: 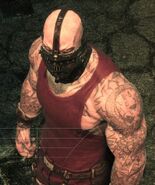 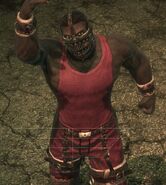 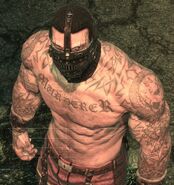 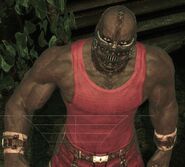 Add a photo to this gallery
Retrieved from "https://batman.fandom.com/wiki/High_Security_Henchman?oldid=214573"
Community content is available under CC-BY-SA unless otherwise noted.