"There's 50 million bucks riding on this. So I don't wanna hear any excuses. Bag the Bat and let's get paid!"
―Howard Branden to the GCPD Officers about Batman in Predator[src]

Howard "Scott" Branden, was the leader of the GCPD SWAT Team under the corrupt command of Commissioner Gillian B. Loeb. One of the most crooked officers who served on the force, Branden led the SWAT Division as little more than a secondary gang in Gotham City, working with the city's various mob organizations and gangs, used his connections to the criminal underworld to intimidate Gotham's citizens and extort profits from them. With particular loyalty to both Black Mask and Loeb, Branden committed an assortment of crimes, from evidence tampering and drug trafficking to cold blooded murder, throughout his career.

As Branden's trigger happy attitude ensured that countless innocent individuals would be caught in his crosshairs during not only his legitimate assignments, but also during his criminal activities as well, the SWAT Team earned itself a notorious reputation among Gotham's citizens, criminals, and other GCPD Officers. Always on the prowl for another opportunity to increase his own personal desires, Branden accepted an assignment from Black Mask (actually the Joker who impersonated him) to kill Batman in order to collect a $50 million bounty that was placed on his head on Christmas Eve.

At some point, Branden was ordered by Commissioner Loeb to take a request by a man, who used the handle "Façade" to gain illicit material. Branden later relayed that in secret with one of the desk jockies after he made sure that the cameras were not active (per routine maintenance). In addition, due to Batman spooking several of the cops under his command, Branden tried to request to Loeb that they ease down on the corruption, mostly due to fear of the vigilante. However, Loeb refused, and was unwilling to sacrifice gaining control of Gotham over "cold feet," as well as gave the order to try and kill Batman.

As part of the corrupt organization of the GCPD, Branden was one of the officers who wanted to kill Batman instead of turning him in. Branden also made a deal with Black Mask to get paid $50 million if they took Batman out, after he learned of the hit that Black Mask had placed on him from Killer Croc via interrogation. He also had his SWAT team meet with him so they could also participate in the bounty, even going so far as to tell them to blow off any prior assignments they might have had, and also implied that he will use his knowledge of where Black Mask store his money to take the $50 million after bagging Batman regardless of whether the latter kept his word or not. In addition, Branden, or at least his SWAT team, orchestrated a minor-scale prison riot within the GCPD in an attempt to make James Gordon look incompetent as acting Commissioner for the GCPD, even hinting at the latch mechanism toward a Venom using criminal. However, the riot ended up quelled by Batman (who had been passing through to get back to the server room after retrieving a Disruptor unit confiscated from a local hoodlum.).

Branden discovered that Batman was inside the GCPD Building when he infiltrated it for information on the National Criminal Database. When Batman met up with Captain James Gordon, Branden and his team intercepted, with Gordon telling them to open fire if he moved. Batman threw down a Smoke Pellet, got Gordon out of the way, and took out Branden and his men.

Branden later encountered Batman at the Royal Hotel. After Batman saved the Joker from falling to his death, Branden appeared and surrounded Batman with his men, but Batman managed to escape with the Batwing, and left Branden with the Joker.

Later, on the Pioneers Bridge, despite Batman warning Gordon not to send his men onto the bridge, Gordon did so, and effectively got Branden and his team taken hostage by Firefly. Branden then tried to tell Firefly's Henchmen that their boss would most likely destroy the bridge anyways, and also cited an explosion that was heard. However, Firefly's Henchmen ignored Branden due to them being paid by Firefly extensively, and besides which, the explosion that he heard was not one of the bombs that Firefly had wired to the four portions of the bridge, as "the whole city'll know, hell the whole eastern seaboard'll know" if one of their bombs went off. When Batman found Branden, he untied him, told him that it was the Joker who placed the bounty on his head, and said that he was currently at Blackgate Prison, but Branden attacked him, and said that while he may have already been aware of the Joker's scam, he still had a score to settle with him. Batman easily knocked Branden out, and said that he gave him the rest of the night off.

Branden's corrupt nature, including having his entire SWAT Division try to undergo an assassination attempt for money, was later exposed on Christmas Day. That eventually resulted in Branden's suspension from the force without pay, which was still in effect by the New Year.

Two pictures of Branden on his desk in the SWAT Manager's Office. 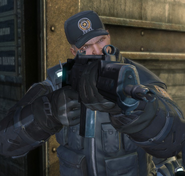 Branden aiming his assault rifle at Batman on Rooftop Maintenance.

Retrieved from "https://batman.fandom.com/wiki/Howard_Branden_(Arkhamverse)?oldid=214749"
Community content is available under CC-BY-SA unless otherwise noted.