Knack for piecing together broken or disassembled items

Matt L. Jones (Voice)
Humphry Dumpler, a large, portly, well-mannered man, is obsessed with putting broken things back together again, even if he has to take them apart. Obese and bald, Dumpler was nicknamed "Humpty-Dumpty" for his egglike form. His crimes at first were minor break-ins, leading to small mechanical items no longer functioning properly due to Dumpty's inability to adequately reassemble them after taking them apart. But soon his obsession grew to the point that major disasters occurred in Gotham and Dumpty's crimes also extended to an attempt to "fix" his abusive grandmother by dismembering her and then attempting a Frankenstein-like reassembly. At Arkham Asylum, Humpty Dumpty is a model inmate, his quiet nature and imposing physique inuring to the madness surrounding him.

Humpty Dumpty debuted in the 2003 series Arkham Asylum: Living Hell. Humphry Dumpler is a large, portly, well-mannered man with an egg shaped head (the source of his alias) who speaks in rhyme and is obsessed with repairing and putting back together that which he considers to be broken. This factors into his crimes where Humpty would sneak out late at night to disassemble and reassemble mechanical devices which had upset him in some way. As his sole knowledge about their workings came from books borrowed from the public library, the "fixed" devices caused numerous accidents.

Humpty's final crime was to adjust the gears in a clock tower. This caused one of its hands to fly off and a chain reaction in which dozens of enormous signage objects crashed to the streets and killed people (which inspired a law banning such devices.). When Batgirl tried to apprehend him for this, he fell off the rooftop. She saved him - but dislocated her arms in the process. Humpty, being far from aggressive, promptly slipped her arms back into her sockets and surrendered himself to her. Revealing that she had tracked him by his overdue library withdrawals, her sole question was why he had borrowed a copy of Gray's Anatomy. Humpty placidly took her to his home to reveal he had dissected his abusive grandmother and sewn her back together with bootlace in an ill-thought attempt to "fix" her. It was likely this crime resulted in him being sentenced to the Arkham Asylum for the insane.

He was a model prisoner at Arkham Asylum where he occasionally was recruited by Dr. Jeremiah Arkham to assist in such projects such as reassembling a broken mirror or repairing Scarface for the Ventriloquist. There he befriends Warren White, and saves his life from Death Rattle (another Living Hell original) and Two Face before Warren became Great White Shark.

He later joined Alexander Luthor, Jr.'s Society, as shown in the pages of Villains United.

In the "Battle For The Cowl" storyline, Humpty Dumpty is recruited by a new Black Mask to a part of a group of villains that aiming to take over Gotham. 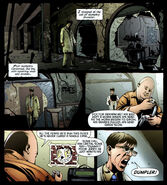 Humpty Dumpty has a skill and unique knowledge for the processes of disassembly and reassembly. Dumpty is also extremely heavy and strong, although he possesses an almost unnaturally quiet, deliberate nature. Ritualized childhood abuse has left Dumpty with a severe case of arrested development and an inability to assimilate into modern society.

Psychological Profile: Developmentally disabled, with an IQ of just under 70 and symptoms of emotional retardation and regression, Dumpler is also extremely obese. Dumpler's most intriguing mental disorder is his obsessive-compulsive fixation on fixing broken items. This manifested itself most notably in a fascinating (albeit horrific) attempt to "fix" an abusive relative through dismemberment and reassembly.

His imposing physique intimidates many orderlies, guards, and inmates, but his simple mental state makes him easy to manipulate and control, so I find no reason to be afraid of him.

Injustice: Gods Among Us

Although the character himself does not make an appearance, his namesake is briefly referenced by the Joker in the story mode, where he taunted Lex Luthor's being shot down by missiles and falling onto a Regime APC by saying "Humpty Dumpty fell through a truck... Humpty Dumpty's suit is all f-" before being interrupted by Harley Quinn.