"It took time, of course, to find the perfect donors. To graft on the flesh and, finally, to lose myself in order to create...this."
―Hush to Batman revealing his pieced-together face which looked exactly like Bruce Wayne.[src]

Hush, formally known as Dr. Thomas Elliot, was born into a wealthy family and was a childhood friend of Bruce Wayne, but, unlike Bruce, despised his parents due to his father's abusive nature and his mother's inability to control his father's temper towards him. Driven by independence and wealth, Elliot cut the brakes of his parents' car, which killed his father and severely injured his mother, who only survived due to the surgical skills of Thomas Wayne, Bruce's father.

Elliot was forced to wait for his mother to die to obtain the fortune, but never received his coveted inheritance as it was used entirely by his mother to refurbish Gotham City's hospitals prior to her death. As a result, Elliot developed a violent and maddened rage towards the Wayne Family for denying him what he viewed was rightfully his; a rage that eventually centralized on only Bruce after the death of his parents. Driven by a desire for revenge against Bruce and his inheritance, Elliot spent decades developing an elaborate scheme to ruin his former friend's life and satisfy his lust for vengeance and wealth.

Although he did not appear, Thomas Elliot was mentioned by Alfred; he told Bruce that Thomas had called to celebrate a surgery that he just completed. Also, in Bane's Underground HQ, there was a newspaper on the floor with the topic "The Identity Thief Strikes Again". That meant that Elliot had already started to construct the mask of Bruce Wayne's face and finally finished it in Arkham City.

When Arkham Island was opened again, Thomas Elliot started to work there as a doctor.

At some point, he was the one who was responsible for the surgery that separated Hammer and Sickle, and who was hired by the Joker to perform the surgery in exchange for the finances that funded his later surgeries.

Although Hush didn't appear, Dr. Elliot's night shifts appeared on a duty roster that hung on the wall in the Surgery Room. Scanning Elliot's shift on the roster unlocked his bio. The duty roster confirmed that he treated both the Mad Hatter and Firefly.

Elliot likely continued to work as a doctor at Arkham Asylum until his transfer to Arkham City.

Hush appeared early during the events of Arkham City in the Church, which was made into the new medical facility for the prison. After Batman rescued all of the doctors and nurses from Joker's Henchmen, Batman found Elliot (although his name was not known at that point) on a gurney, his face covered in bandages, and holding onto a crate. Another doctor, Adam Hamasaki, informed Batman that the patient was a doctor and amazing surgeon who transferred to Arkham City from Arkham Asylum. Over the course of several weeks though, Elliot had stolen various drugs and then cut his own face off. Elliot was found by Adam while he laughed in a corner and held onto a crate, which lead Adam to believe that the gifted surgeon had lost his grip on sanity due to the hellish nature of Arkham City. Adam wrapped Elliot's face in bandages, but was unable to pry the crate from his hands.

While Adam believed that Elliot had simply lost his sanity, the truth was far more insidious. In reality, Elliot led another life as a serial killer known as "The Identity Thief", who had murdered three people in Gotham over the previous three months, surgically removing their faces, and stored them in a crate for his own purposes. Elliot's goal was to take the faces of individuals with similar facial features as Bruce Wayne, with whom he held a personal vendetta against, and surgically graft them onto his own face so that he could assume his identity and claim all the privileges and amenities that complimented the billionaire's lifestyle.

After learning that several of his targets had been incarcerated in Arkham City, Elliot willingly transferred to the makeshift medical center, stationed in the old Gotham Cathedral, within the super prison to complete his plans. As he began to locate his three remaining targets, Elliot began to steal medication from the center and eventually removed his own face, using the stolen antibiotics to ease the immense pain. Elliot escaped the Cathedral while the Riddler abducted the rest of the medical and security team and made his way to an old brownstone behind the Solomon Wayne Courthouse and converted it into his base of operations within the prison.

While on his mission to discover the truth behind Protocol 10, Batman eventually pursued Hush while the killer murdered several more victims and removed their faces, using several complex forensic methods to cover his tracks. Batman surmised that the murders were so well executed that the killer had to have planned them over an extremely long period of time and was amazed when he learned that the finger prints left at one crime scene was a match to his own. This led Oracle to speculate that Batman himself may have been behind the crimes, and proposed that he may have been drugged by Hugo Strange or Scarecrow. Batman rejected her idea, albeit with some reluctance, and continued his search.

In time, Batman uncovered a third victim who matched the same characteristics as the previous victims. While Batman studied the crime scene, he realized that there were traces of bleach nearby. Following the trail, Batman eventually located an Arkham City inmate who revealed he'd been paid off by Bruce Wayne to dump the body and clean up the area. He revealed the location and Batman headed out to investigate.

When Batman finally tracked Hush to his hideout, he found a disturbing and heinous makeshift operating chamber where Hush performed his inhuman experiments. It was revealed that Hush had surgically altered his face and fingerprints to look like Bruce Wayne by using his victim's faces and prints in his quest for vengeance. Hush ended up escaping, with Batman commenting he would track him down the next night. Contacting Oracle, Batman closed his active case in Arkham City, and opened up a new one for Thomas Elliot, and planned on investigating everything that was related to this former friend of Bruce Wayne and new enemy of Batman once Arkham City was shut-down.

It was established within Arkham Knight Genesis that Elliot had, in fact, been working with Jason Todd, under the guise of the Arkham Knight, for years in order to perfect his new face. While it was unknown, though probable, if Hush also worked with Scarecrow as a result of this partnership, the villain was nonetheless made fully aware of the attack on Gotham that would commence on Halloween.

Within the comic, the Arkham Knight rescued Hush from the Ratcatcher, who was revealed to have survived the Penguin's vicious attack on him within Arkham City, albeit barely, and believed that Hush truly was Bruce Wayne. The Knight brutally murdered Ratcatcher and his army of rats by burning them all to a literal crisp with a military-grade taser. After he escorted his associate to his makeshift hideout, Todd begrudged Elliot for revealing his new face too soon and stressed that he must be patient until all the pieces were in place for their plans.

After he gave Elliot a medical cream that was made from the remnants of Clayface from underneath Arkham City, Todd revealed that this would heal his scars completely by the time their plans were put into effect. While Elliot was unaware that Batman and Bruce Wayne were one and the same, he realized that taking down the playboy's business empire would aid the Knight in his schemes and operations that targeted Gotham, while he would get everything that he ever wanted in his own plans and lust for vengeance; Bruce's entire fortune, his place as Gotham's most powerful and wealthiest individual, and his former childhood friend dead.

This revealed that the attack on Wayne Tower by Hush's hands was not merely a coincidence that coincided with Scarecrow's plans, but was actually part of the coordinated attack on Batman's life and allies, with Elliot's role meant to specifically attack Lucius Fox and the heart of where the hero received his immense funding and equipment. 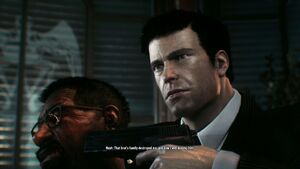 Elliot returned during the events that unfolded in Gotham as Batman fought Scarecrow and the Arkham Knight. Elliot enacted the plan that he formed with the Knight, used the mask that made him look identical to Bruce Wayne, and infiltrated Wayne Tower undetected.

Elliot entered Bruce's Office in an attempt to steal his funding, but couldn't due to the retinal scanner that denied him access, a security measure that he did not anticipate. Lucius entered the office, and was concerned for the well being of his boss, at which point Elliot attacked him and used his retina to access the computer. After he succeeded in stealing Wayne's funds, Hush waited for Batman while he held Lucius at gunpoint.

When Batman arrived, Elliot transmitted a message that requested that Batman "join the party", as well as casually threatened that if he did anything stupid, "Wayne Enterprises will be in need of a new CEO." Elliot demanded Batman to get Bruce Wayne in the hope of killing him, take his place as Gotham's most powerful citizen, and even revealed to him that he was responsible for the death of his father. Batman took off his cowl in front of his childhood friend and told him: "Take your best shot Tommy".

Shocked at the realization that Bruce was Batman, Elliot became very unstable and in a split second, attempted to kill Bruce, only to be countered and smashed through Bruce's desk by Batman after Lucius scarred Elliot's new face with a glass vase, which served as poetic justice for the killer. Bruce ordered Eliot locked up in the vault at Wayne Tower until he could face a judge, and was unable to take him to the GCPD Lockup directly without risking his secret identity and undergoing an investigation.

With Batman's true identity revealed as Bruce Wayne to the entire world by the end of the night, Elliot's plans were completely destroyed as he would be sent to jail, regardless of which identity he went under, with the evidence of all his crimes coming to light. With nothing more than a scarred face to showcase the results of his plans, Elliot's agenda for vengeance years in the making were all in vain, destroyed within a split second along with the remainder of his life, now to be spent entirely behind bars.