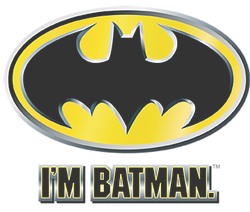 "I'm Batman" is an iconic quote first popularized in the 1989 film. Technically not the first time spoken, but it was never previously presented in an intimidating manner or ever emphasized prior. Variations on this threatening declaration began to emerge in subsequent adaptations like Batman: The Animated Series, Batman & Robin and Batman Beyond. It was directly referenced in Batman Begins during the character's introductory scene. Since then the phrase has gained even more traction thanks to the rise of social networking and pop culture references in mass media. It is often repeated in LEGO Batman: The Movie - DC Super Heroes Unite and video games.