Batman created specialized armor plating and coating for his Sonar Batsuit, designed to nullify Freeze Gun blasts. It also had a new Utility Belt and gadgets prepared for that mission.

After meeting Batgirl at the Turkish Bath House, Batman and Robin return to the Batcave to put ice armor on their costumes before batting Mr. Freeze. The silver plating seems to be the same ice reflecting material the Bathammer hull is made from.

Batgirl was given a motorcycle called the Batblade, while Robin rode a Batskiff adorned with his red logo. All of them wore unique variations of this Ice Armor as they traveled to the Observatory batting the Hockey Thugs. Batman used a voice command to activate a silver reflector shield on the Bathammer to reflect the ray coming from the Freezemobile, encasing it in ice. 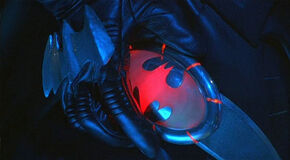 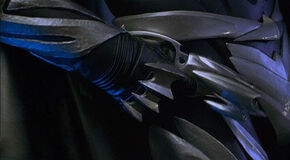 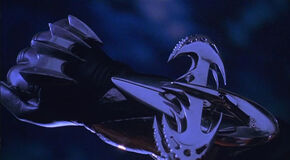 Gauntlet Grapple Launchers
Add a photo to this gallery

Jose Fernandez designed and sculpted this batsuit under direction from Bob Ringwood and Joel Schumacher. The Sonar costume was reused to create this costume.

Retrieved from "https://batman.fandom.com/wiki/Ice_Armor?oldid=216250"
Community content is available under CC-BY-SA unless otherwise noted.