Batman
Following his return to the 21st century after being sent careening through time by Darkseid during the Final Crisis, Bruce Wayne dons the "Insider" guise in order to freely explore Gotham and assess the state of things that occurred during his absence.

Built with a different appearance than the traditional Batsuit, the Insider uniform enables the wearer to mimic a selection of super-abilities through the use of high-powered technology, although the suit's power is limited; requiring a recharge-time after the usage of each ability.

While agile enough for gymnastic manoeuvres, the suit has enough armour to protect the wearer from sword strikes or even take a missile blast.

The suit can recharge its power supply by either plugging into an external power source or by absorbing energy that is being directed upon it. The suit also enables a direct link to a JLA teleporter, enabling the wearer to hack into the Justice League's teleportation system and teleport anywhere on the planet, although this, too, uses power.

Other abilities include: ability to trace frequencies, and selection of optical visions for infrared to movement tracking and normal. 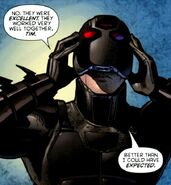 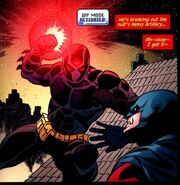 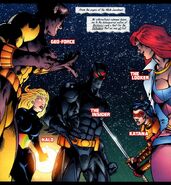 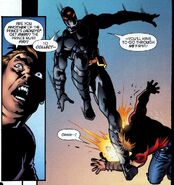