"I keep asking myself why I didn't bring him in. And I now know, the truth is I let him go because of you. Because you believe in him. I don't know... They put me in charge of a station full of rotten cops. And I can't change them - any more than I can change this damn city... Or at least that's what I used to think. But maybe, maybe I can give them something to believe in. Maybe HE can give them something to believe in."
―James Gordon to Barbara about Batman[src]

Captain James Gordon is part of the Gotham City Police Department, serving as one of the few honest officers in the entire department. Trapped in a thoroughly corrupt police force, Gordon struggles to accept the reality of his occupation and actually making a difference in Gotham City for the better.

His life forever changed on a particularly snowy Christmas Eve, when countless, outlandish, and sadistic villains appeared in Gotham City, all with their own designs for the city, and his eventual familiarity with Batman.

Despite his initial resentment of Batman and how he worked, Gordon was eventually forced to choose between cleaning up the city through a police force as corrupt as the very criminals that he sought to bring to justice or to partly work outside the law with the Dark Knight to finally give the city the hope that it was overdue to have for decades.

Not much was known about his past, although Gordon implied that he had learned how to fight due to having a "rough childhood."

Batman: “Listen, I'm on your side.”
James Gordon: “My side? My side works within the law. My side doesn't leave suspects with broken bones, and missing teeth. We've earned Gotham's respect.”
Batman: “If that were true, I wouldn't be here.”
— Batman and James Gordon[src]

The Gotham City Police Department, led by Commissioner Gillian B. Loeb, was thoroughly corrupt. They were aware of Batman, and did not condone his actions towards criminality. James Gordon was one of the few members of the GCPD to go by the book, which made him unpopular, especially to Loeb. Loeb considered having Gordon killed after attempts at making him look incompetent by the likes of Detective Arnold Flass had failed. Black Mask, on the other hand, figured that Gordon's by the book nature would prove useful regardless in making it seem like there was some law and order in the city. In the meantime, Gordon was also being watched by then-corrupt GCPD member, Harvey Bullock on Loeb's orders, and presumably placed into a honeypot trap that was arranged by the latter. Gordon also got some injuries from "minor scuffles," which caused his daughter, Barbara, to sarcastically inquire whether it was the crooks or his coworkers who were responsible that time before she remembered that they're one and the same in reference to the notorious amount of corruption in the GCPD. In addition, Gordon's House eventually ended up watched, which Barbara later revealed to Gordon, including that the ones watching his house were the police when she explained why she was at the GCPD Building at night despite his stating against it. Fed up by their actions against him, and realizing that they'd try to at the very least fire him sooner or later, Gordon supplied his daughter with a police transceiver and all the frequencies that his coworkers used, including the ones marked in red that to their knowledge that he didn't know about, and was fully aware that if caught, it would likely cost him his job. That was later used as extortion by Enigma under Black Mask/The Joker's orders.

On Christmas Eve, during a press conference featuring the planned execution of the notorious serial-killer Julian Gregory Day, aka Calendar Man, Gordon was quoted on GCTV News and said: "There is no such thing as a 'bat man.'," in response to one of the news reporters questions that implied that Batman had some involvement in ensuring Day's arrest. Gordon didn't believe that Batman existed until he, Bullock, and two other GCPD officers saw the masked vigilante defeat Killer Croc during a breakout at Blackgate Prison on Christmas Eve. Led by Black Mask, the breakout saw the execution of Commissioner Loeb. With Loeb dead, Gordon became the new leader of the corrupt GCPD, including Howard Branden and his SWAT team.

After interrogating Croc, Gordon and other members of the GCPD learned that eight assassins - among the most dangerous criminals on record - were in Gotham City to compete for a $50 million bounty which Black Mask offered for Batman's head. Upon hearing that, Branden and SWAT intended to eradicate Gordon and collect Black Mask's bounty for themselves. In addition, several other corrupt cops at the GCPD also instigated a prison riot within the GCPD Building in order to make Gordon look bad, which resulted in several cops' deaths before it was quelled by Batman (who, at the time, was making his way back from the Evidence Locker). Meanwhile, as Gordon argued with Barbara, Batman infiltrated the GCPD to access the National Criminal Database, and needed more information to solve the Lacey Towers Murder Case. In the midst of his escape, Batman encountered Gordon until Branden's SWAT interrupted.

Later, Batman was found at the Royal Hotel, encountering a criminal name "The Joker" and fighting Bane, one of the eight assassins. Unbeknownst to Gordon and other GCPD members, Joker had replaced Black Mask days earlier, took over his criminal empire, and hired the assassins for the bounty on Batman. As Bane escaped by helicopter, Batman saved the Joker from falling from the hotel before he left him to the GCPD. After Gordon arrived at the scene, the Joker was left intrigued by the events as he was taken to Blackgate.

On the Gotham Pioneers Bridge, Firefly launched an assault, which forced Batman and Gordon to work together to overcome the assassin and save the hostages. However, Firefly had the bridge rigged with bombs and ordered his men to set the timers should the GCPD breach the bridge. Though Batman tried to warn him of Firefly's explosives, Gordon refused to listen. Even after Batman had defused three of the four bombs, Gordon wouldn't cooperate. By the time that Batman fought Firefly, Gordon ordered the bomb squad to breach. With Firefly defeated, Gordon briefly spoke with Batman, and said that even though they didn't listen to each other, they covered it pretty well. But when Gordon looked up, Batman disappeared.

But the victory was short lasted, as the Joker escaped from his cell, lead another riot at Blackgate, and took over the entire prison. Gordon and the GCPD worked with Batman to retake the prison. Batman was forced to fight Bane to the death when Joker placed himself in an electric chair that would automatically kill him unless Bane died. Gordon intervened, freed Blackgate's Warden, Martin Joseph, and, after discovering to his horror that Joker had set himself in the electric chair and it was nearly charged for electrocution, tried freeing Joker from the electric chair. However, Joker subdued Warden Joseph while he threatened Gordon with the police captain's own gun. Ultimately, Batman "killed" Bane: in reality, he used the Electrocutioner's Shock Gloves to put Bane in cardiopulmonary arrest. A satisfied Joker then left, and intended to detonate more bombs before sunrise, but not before he attempted to shoot Warden Joseph when he stood up to the psychopath, and caused Gordon to intercept the bullet. Joseph looked at Gordon's wound, but said: "Thank God you had your vest on." Batman then asked Gordon and Joseph for their help in stopping the Joker while he resuscitated Bane.

While chasing the Joker, Warden Joseph was shot by a sniper, much to Gordon's anger. As Batman came to check on Joseph, Gordon hit the sniper, who unintentionally shot Croc. Gordon and Batman then fought more inmates to keep them away from the Warden. With Gordon's help, Batman made his way to the Prison Chapel to find the Joker. Although the Joker tried to goad Batman into killing him, Batman only knocked him unconscious. Entering the chapel, Gordon told Batman that any of his guys at the GCPD would have killed Joker. After he gave Gordon his gun back, Batman said: "This city deserves better than that." Despite his daughter thinking that Batman was a hero, Gordon said he that still had to bring him in. But while reporting to Bullock, Batman escaped while Gordon's back was turned.

Despite what worked within the law, Gordon decided to let Batman go. After that, Gordon reflected on how he kept asking himself why he didn't bring Batman in. Gordon soon knew that he did it because Barbara believed in Batman. Even though he was put in charge of a station full of rotten cops that he couldn't change any more than the city, Gordon believed that Batman could help Gotham.

Later on, Gordon requested for Batman to locate 20 escaped Blackgate Prisoners, as the GCPD was currently understaffed thanks in large part to the Joker's earlier riot at the prison. After Batman retrieved the prisoners, and requested that Gordon have the police back off and let him do his duty regarding stopping criminals, with Gordon stating that he'd think it, and Batman telling him not to take too long, as he suspected that a similar event to what he had just quelled may occur again in the near future.

Gordon during the events of the game, attempted to locate several of Anarky's Henchmen that were trying to stir up trouble, and also told several units to locate suspected Anarky spots. In addition, Gordon, via evidence supplied anonymously by Batman via Alfred, also arrested Ferris Boyle of GothCorp, alongside The Penguin, and Mr. Freeze. Gordon also was considered a likely candidate to fill the position of GCPD Commissioner, especially after Mayor Hamilton Hill announced his resignation via pending corruption charges against him from evidence supplied by an anonymous source to the News Media. 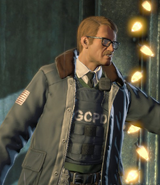 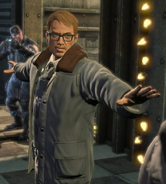 Add a photo to this gallery
Retrieved from "https://batman.fandom.com/wiki/James_Gordon_(Batman:_Arkham_Origins)?oldid=176494"
Community content is available under CC-BY-SA unless otherwise noted.