Batman Wiki
Register
Don't have an account?
Sign In
Advertisement
in: Under Construction, Batman: The Animated Series Characters, Batman: Mask of the Phantasm Characters, The New Batman Adventures Characters

Batman: The Animated Series
The New Batman Adventures
Batman & Mr. Freeze: SubZero
Batman: Mystery of the Batwoman
James Worthington "Jim" Gordon is the Commissioner of the Gotham Police department in Batman: The Animated Series. He is one of Batman's most trusted allies. He's the father of Barbara Gordon, aka Batgirl, who later will take his place as Police Commissioner.

Gordon was a lieutenant when Batman first appeared in Gotham, and was first on the scene at the tragic deaths of John and Mary Grayson. He put the young Dick Grayson in Bruce Wayne's custody, fostering the friendship that would become their partnership as Batman and Robin. At some point, Gordon was promoted to Police Commissioner and began a profession partnership with the Dynamic Duo.

Gordon commanded enormous respect and loyalty from his officers, including Detectives Harvey Bullock and Renee Montoya. Despite this, he often had to contend with distrust of Batman from both the officers, most prominently Bullock, and the city's hierarchy. Gordon also was the last person to suspect Batman of crimes, including when the Dark Knight was suspected of attacking a variety pharmaceutical companies purported by Man-Bat and the Phantasm's murder spree.

Gordon was in charge of the investigation about the poisoning of Harvey Dent. He assigned Renée Montoya to guard Dent's room at the hospital and Harvey Bullock to interrogate the staff of the Rose Café. 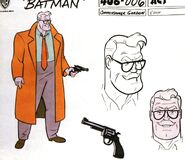