James Gordon was the Commissioner of the Gotham City Police Department.

Gordon regards Batman as a rumor at best and a vigilante at worst, though, by the end of the film, he and Gotham City's citizens publicly acknowledged his usefulness, and received from him the gift of the Batsignal.

In the sequels, Gordon played only a minimal role compared to his role in other media, but was shown to completely trust Batman and publicly defended him. Gordon even appeared to doubt Batman's involvement in the kidnapping of the Ice Princess in Batman Returns, and tried to stop the GCPD from shooting him.

Although Barbara Gordon is his daughter, or niece depending on which version, in the comics, in the last Schumacher film of the series, Batman & Robin, her name was changed to Barbara Wilson and she was Alfred Pennyworth's niece. There were no known women in Gordon's life in that series, although his wife appeared with him at the party that Bruce Wayne hosted at Wayne Manor and Poison Ivy seduced him, which caused him to gave in, and he gave her the keys to Gotham City Police Headquarters in Batman & Robin.

Behind the Scenes Edit

In Batman, and its three sequels, Gordon was portrayed by Pat Hingle. Visually the character draws inspiration from the original Golden Age Gordon, an older man wearing a Derby hat. The role of the police Commissioner being more desk work than street level is also realistically portrayed, ignoring Frank Miller's then new, younger take in Batman: Year One (1987). Curiously, this is one of the few incarnations that is never seen wearing eyeglasses, much like the Dozierverse version played by Neil Hamilton. 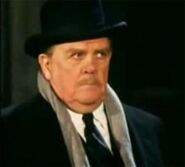 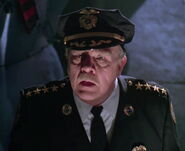 Retrieved from "https://batman.fandom.com/wiki/James_Gordon_(Pat_Hingle)?oldid=206368"
Community content is available under CC-BY-SA unless otherwise noted.