"Without me you're just a joke.. without a punchline"
―Jeremiah Valeska to Bruce Wayne

Jeremiah Valeska was a tritagonist turned main antagonist in the television series, Gotham. He is the twin brother of the terrorist cult leader, Jerome Valeska.

Jeremiah is the show's equivalent to The Joker, although he never took on the Joker alias.

According to Jeremiah, Jerome would abuse and scare Jeremiah when he was little. Jeremiah would later recount that he realized Jerome was dangerous and knew he needed to get away from him so he sneaked away one night from Haley's Circus and had his uncle Zachary place him at St. Ignatius. Shortly afterwards, Jeremiah took on the alias of "Xander Wilde." He himself would later explain that he did this since he wanted to make it more difficult for Jerome to track him down, but Jerome, on the other hand, stated that he got adopted by rich people, therefore explaining his changed name.

He would then study at school and become an engineer. Four years after graduating, he started construction on his hideout, an underground maze bunker in a forest on the outskirts of Gotham City. The building took 6 years to complete.

At an unknown point in time, he met a woman named Ecco and hired her as his proxy and assistant.

Ten years after Jeremiah's graduation, Jerome breaks out of Arkham Asylum and kills their uncle, Zachary at the diner he owns for the location of his brother.

Jeremiah is then confronted by the stunned Captain Jim Gordon and Detective Harvey Bullock. They ask Jeremiah about him and Jerome, he tells them that once Jerome tried to kill him, so he ran away and changed his name to Xander Wilde. They then find out that he‘s holding Jerome captive, so they immediately order Jeremiah to let him go but he refuses to do so. After finding out that the Legion of Horribles is inside the building, and that they hypnotized Ecco, Jeremiah takes Jim and Harvey into the halls of his house, which were built like a maze that he’s the only one he can get out of. The three find Ecco there but, since she was hypnotized by Tetch, she gets into a fight with them, Ecco easily wins and takes Jeremiah to Jerome, but she’s eventually knocked out by Jim. Jeremiah then tries to escape but Jerome finds him. They have a verbal fight, in which Jerome tells he’s disappointed by what Jeremiah told about him, since, in his point of view, all of the things he said were lies. Jeremiah did agree that certain things that he told were in fact exaggerations of the truth. Jerome also tells Jeremiah that he’s going to drive him crazy and then kill him. Jim and Harvey eventually get to them, so Jerome runs away leaving Jeremiah behind. Jeremiah is later taken to the GCPD so that he can be put into protective custody.

Jerome took the Mayor, his wife, and a police officer hostage. He demanded that Jim bring him, Jeremiah and Bruce Wayne. Jeremiah is hesitant to go at first but later agrees. Jerome straps Jeremiah and Bruce into a chair. Jerome tells the crowd the story of him and Jeremiah and then cuts Jeremiah free. Determined to prove Jeremiah is just like him, Jerome hands Jeremiah the knife and tells him to take his best shot. Jeremiah tries to stab Jerome, who knocks him out with a single punch. Later, Jeremiah approaches Jerome’s body after he fell to his death. As Jeremiah walks away, Bruce asks him to let Wayne Enterprises fund his work. Jeremiah thanks Bruce and shakes his hand.

After Jerome's death, Jeremiah discovered a gift in his secret office and opened it. The gift is revealed to be a jack in the box in the form of a disfigured clown head that sprays Jeremiah with a special mixture of the laughing venom created by Jerome. The gas then eventually drives Jeremiah completely insane as Jerome's voice speaks to him in a recording coming out of the gift box, encouraging Jeremiah to be Jerome's successor and his ultimate revenge. Even though Jeremiah tried to fight the venom, it ultimately turned him into a complete maniac with pale skin and red lips. 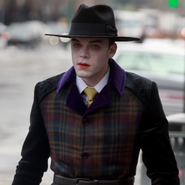 [1]WB will not allow the show to use the name Joker for fear of diluting the brand.[2] The visual representation of the source material is also extremely limited. Purple hair was considered at one point, before settling on extremely dark, vaguely green hair.

Retrieved from "https://batman.fandom.com/wiki/Jeremiah_Valeska?oldid=212063"
Community content is available under CC-BY-SA unless otherwise noted.