Joe Chill
Joe Chill's gun is the weapon which was used to murder Martha and Dr. Thomas Wayne.

The gun was used by Joe Chill to murder Thomas and Martha Wayne in Crime Alley, in-front of their young son Bruce.

In this continuity, the gun was sold to Joe Chill by Mallory Madison, father of Bruce's future love-interest Julie Madison. Twenty years after the murder of Thomas and Martha, Bruce Wayne purchased the gun on the black-market for  fifteen hundred thousand dollars. 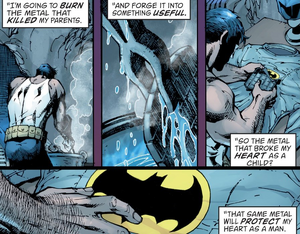 Bruce would go on to melt down the gun and use the metal to forge a protective plate beneath the yellow emblem on his batsuit.

In this continuity, Joe Chill murdered Bruce Wayne rather than Thomas and Martha. As a result, Thomas Wayne became Batman and murdered Joe Chill while his wife became the Joker. Thomas not only used to gun as a trophy in the Batcave but would also use the gun himself as his weapon of choice.