"Not a lot of people know what it feels like, do they? To be angry...in your bones. I mean, they understand. Foster parents, everybody understands...for a while. Then they want the angry little kid to do something he knows he can't do: move on. So after a while they stop understanding. They send the angry kid to a boys' home. I figured it out too late. You gotta learn to hide the anger. Practice smiling in the mirror. It's like putting on a mask."
―Blake to Bruce Wayne[src]

Robin John Blake was a detective working for the Gotham City Police Department who became a trusted ally to Batman during Bane's reign of terror. After the presumed death of Batman, he resigned from the GCPD and inherited the Batcave after receiving the coordinates from Batman.

"So you showed up this one day, in a cool car. Pretty girl on your arm. We were so excited. Bruce Wayne, billionaire orphan? I mean, we used to make up stories about you, man. Legends. And, you know, with the other kids, that's all it was, just stories, but.... Right when I saw you, I knew who you really were. I'd seen that look on your face before. It's the same one I taught myself. "
―Blake to Bruce Wayne[src]

During his childhood, Robin's mother died when he was at a young age and later on, his father died when he was nine. With that, he then lived in Gotham City's orphanage. He created a mask for himself by hiding his anger behind a smile. He and the orphans also idolized Bruce Wayne for being the "billionaire orphan". Thus, from his enabling wealth and losing his parents to crime, they thought he was Batman and made stories about it. But the other kids only saw it as just stories because Bruce's carefree personality didn't fit Batman's. Blake took the stories seriously when he sees the similar attempt at the playboy billionaire hiding his true angry nature when he visited the orphanage.

"I don't know why you took the fall for Dent's murder, but I'm still a believer in the Batman. Even if you're not."
―Blake to Bruce.[src]

Eight years after the death of Harvey Dent, Blake subtly asked Commissioner Gordon about the truth behind Dent's death, but the Commissioner refused to answer. After investigating the sewers of Gotham for suspicious activities happening inside, Blake confronted Bruce, and revealed he knew that he was Batman. Blake asked Wayne to return as Batman, which inspired the latter to do so. After Gordon was hospitalized by Bane and his men, Blake was promoted to detective, allowing him to report directly back to Gordon. Blake was present at Bane's attack on the stock market and witnessed Batman's return where he critized Peter Foley's choice to go after Batman rather than Bane himself. When Bruce lost his wealth due to Bane's attack on the stock market, Blake gave him a ride to Selina Kyle's apartment where Blake learned the meaning of Batman's mask which was to keep his loved ones safe from those seeking to hurt him. Later Bruce disappeared due to Bane injuring and capturing him and Blake un-officially took his place by continuing to investigate Bane's plan in Bruce's place.

Investigating more into Bane's plans, Blake realized that multiple construction workers were hired to supply explosive chemicals, which are incorporated into bombs set up around Gotham to trap officers searching the sewers. Blake's car was victim to one of the explosives, but he survived and rushed to save Gordon, who was about to be assassinated by Bane's men. However, Gordon managed to kill the men before Blake arrived. The two escaped and went into hiding as Bane convinced the lower classes of Gotham to rebel against the law and rich. Blake intercepted Selina Kyle's attempt at escaping Gotham and questioned her on Bruce's fate, though the cat burglar was unsure about it, and Blake arrested her, putting her into Blackgate Prison. Bane escalated the situation when he publicly read Gordon's speech revealing the truth about Harvey Dent's death, and freed all the prisoners in Blackgate, putting all of Gotham into chaos and exiled from the rest of the country.

Blake joined Gordon and his regime of remaining police officers to overthrow Bane and his men to regain control of the city. The plan failed as Gordon and several other men are sentenced to walk on a thin layer of ice. In the commotion, Blake attempted to free the trapped officers underground, but was caught. As he was about to be executed, Batman arrived and saved him, tasking him with evacuating the city as much as he could.

Blake: “I'm not afraid to be seen standing up to these guys.”
Batman: “The mask is not for you. It's to protect the people you care about.”
―Batman gives Blake pointers.[src]

As Batman and his army of cops fought Bane and his men, Blake lead the evacuation with the help of his fellow orphans from the orphanage. However, the police had blocked the only intact bridge and refused entry to Blake, fearing that Bane would detonate a nuclear bomb. When Blake refused to stop walking towards them, the police blew up a part of the bridge, permanently trapping them. However, Batman used the Bat to carry the bomb overseas where it exploded harmlessly over the bay. Blake and the orphans realized Batman had apparently died in doing so, and mourned his death. Disgusted that the mainland police were willing to let Gotham perish, Blake quit the force.

The orphanage moved to a new location: Wayne Manor. Blake received his own inheritance from Bruce, under his birth-name: Robin. When he visited the coordinates he was provided, Robin found himself in the Batcave, appearing to have been hand selected by Bruce himself to take his place as Gotham's protector. 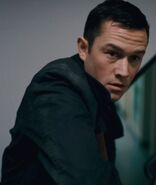