"HE STOLE MY BALLOONS!!! Why didn't somebody tell me that he had one of those... THINGS?"
―The Joker to his Goons about Batman after the balloons are taken away.[src]

Joker's Balloons were used by the Joker to gas the crowds of Gotham City's citizens with Smylex during the planned attack on Gotham's 200th Anniversary's Parade. While a few citizens perished in the fumes, Batman prevented further casualties by dragging away the balloons in the Batwing and released them into the sky, much to the Joker's outrage who then shot his head henchman Bob in frustration.

Early conceptual illustration by Tim Burton for the outline he wrote with Julie Hickson.

Drawing of the Clown balloon.

Drawing of the Baby balloon.

Drawing of the Tiger balloon.

Drawing of the Elephant balloon. 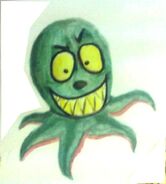 Drawing of the Octopus balloon.

As seen in the licensed 2013 Bottleneck Gallery print.
Add a photo to this gallery

Retrieved from "https://batman.fandom.com/wiki/Joker%27s_Balloons?oldid=206432"
Community content is available under CC-BY-SA unless otherwise noted.