Screenplay:
Scott Silver
Todd Phillips
Characters:
Bob Kane
Bill Finger
Jerry Robinson (creator of Joker, uncredited)
Joker is a 2019 film loosely based on the DC Comics character of the same name. The movie is not part of the current DC film universe, but considered a standalone piece by Warner Bros. While other familiar Gotham City characters are present, there are no allusions to characters outside the Batman property.

In 1981, Arthur Fleck works as a clown-for-hire and lives with his mother, Penny, in Gotham City. The city is collapsing under unemployment, crime, and financial ruin, leaving segments of the population disenfranchised and impoverished. Arthur suffers from a neurological disorder called the Pseudobulbar Affect which causes him to laugh uncontrollably at inopportune times, and regularly visits a social services worker to obtain medication. After a group of street kids steal his property and beat him in an alley, his co-worker, Randall, loans him a gun for protection. Later, Arthur meets Sophie Dumond, a single mother who lives in a neighboring apartment, and takes a liking to her. After Arthur spends a day stalking her around the city, she drops by his apartment to confront him. He sheepishly admits to following her, but she appears relatively unbothered. After a brief friendly exchange, he invites her to his stand-up comedy routine, to which she casually accepts.

While entertaining at a children's hospital, Arthur's gun falls out of his pocket. Arthur is fired for this infraction; Randall lies and says that Arthur bought the gun himself. During the subway ride home, Arthur is beaten by three drunken Wayne Enterprises businessmen; he shoots two in self-defense and executes the remaining man. The murders unintentionally start a movement against Gotham's rich, with protesters donning clown masks in the unidentified killer's image. Arthur later learns from his psychiatrist that social service funds are being cut, leaving him without access to his medication.

Sophie attends Arthur's stand-up comedy routine, which goes poorly; he laughs uncontrollably and has difficulty delivering his jokes. A popular talk show host, Murray Franklin, mocks Arthur by showing clips from the routine on his show. Arthur intercepts a letter written by Penny to local billionaire and mayoral candidate Thomas Wayne, alleging that he is Thomas's illegitimate son, and berates his mother for hiding the truth. Shortly after a visit from two GCPD detectives investigating Arthur's potential involvement in the train murders, Penny falls ill and is hospitalized. Arthur goes to Wayne Manor for answers, where he meets Thomas's son, Bruce. After a scuffle with the family's butler, Alfred Pennyworth, Arthur flees.

At a public event, Arthur confronts Thomas, who tells him that Penny is mentally unstable and not his biological mother. In denial, Arthur visits Arkham State Hospital and steals Penny's case file. He discovers that he was adopted after being abandoned as a baby and that Penny was a neglectful mother who allowed her boyfriend to physically abuse him as a child, causing serious head trauma. Distraught, Arthur goes to the hospital and kills his mother. He returns home and enters Sophie's apartment. Frightened, she tells him to leave; it is revealed that their previous encounters were Arthur's delusions.

Arthur is invited to make a guest appearance on Murray's show due to the unexpected popularity of his routine clips. As he puts on his makeup and outfit, he is visited by his former co-workers Gary and Randall. Arthur murders Randall but leaves Gary unharmed for treating Arthur well in the past. En route to the studio, he is pursued by the two detectives onto a train filled with clown protesters; one of the detectives accidentally kills a protester and incites a riot while Arthur escapes in the chaos.

Before the show goes live, Arthur requests that Murray introduce him as Joker, a reference to Murray's previous mockery. Arthur comes out to a warm reception, but begins telling morbid jokes, admits that he killed the men on the train and rants to Murray about how society abandoned and mocked him. Snapping in a psychotic rage, Arthur suddenly whips out his gun and shoots Murray in the face, killing him instantly. Panic and chaos ensue in the studio, and Arthur is arrested. Riots break out across Gotham. One of the rioters corners the Wayne family in an alley and murders Thomas and his wife Martha. A group of rioters in an ambulance crash into the police car carrying Arthur and free him; he is hailed as a hero by the crowd and dances to their cheers.

Arthur is imprisoned at Arkham State Hospital, handcuffed. Alone with his psychiatrist, Arthur smokes and laughs to himself. When queried "what's so funny", he responds that he is thinking of a joke. When asked to explain it, he simply responds, "You wouldn't get it," before quietly singing the chorus to That's Life. He then skips and dances down the hall, leaving a trail of bloodied footprints (implying that he has killed his doctor) before being chased by the orderlies.

On July 10th of 2018, it was announced that Martin Scorsese would no longer be producing the film.[1] On August 27th of 2018 it was announced that Alec Baldwin would be playing Thomas Wayne in the movie as a "cheesy and tanned businessman who is more in the mold of a 1980s Donald Trump."[2] Two days later Baldwin told USA Today that he was no longer involved, claiming "scheduling conflicts."[3] Brett Cullen was his replacement. 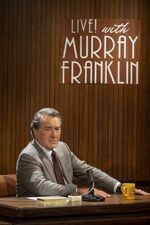 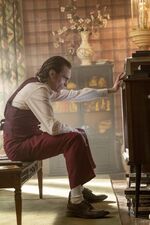 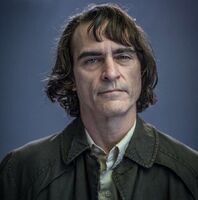 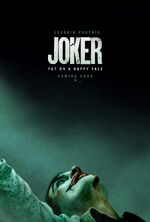 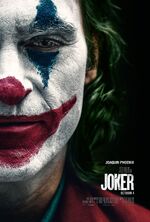 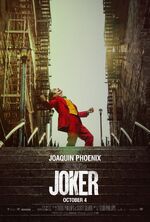 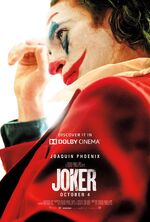 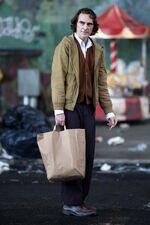 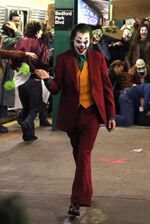 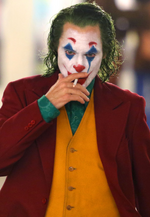 JOKER - Final Trailer
Add a photo to this gallery

Retrieved from "https://batman.fandom.com/wiki/Joker_(film)?oldid=216508"
Community content is available under CC-BY-SA unless otherwise noted.