For the later organization inspired by the gang, see: Joker Gang (Burtonverse)

The Joker
Bob the Goon

Gotham City
The Joker Goons were a gang of criminals who worked for the Joker. There were six leading members who served under Bob the Goon. The group wore a basic uniform that consisted of indigo leather jackets with Joker patches, playing card patches, sunglasses and various kinds of black hats.

This gang was formed after the murder of Carl Grissom at the hands of the Joker. It seemed that individuals who were loyal to Napier were drawn from Grissom's Organization along with various street thugs and mercenaries to create this select cadre. The gang made their debut as a means of intimidating the Gotham City Crimelords after Joker fried Antoine Rotelli with a high-voltage joybuzzer. Vinnie Ricorso was not impressed with this display and called Joker "crazy."

While Bob scouted City Hall, the Joker Goons disguised themselves as street mimes and planned a sneak attack on Ricorso and his associates.

The Joker Goons put purple Smylex in the Flugelheim Museum's ventilation system, which killed all patrons and employees except Vicki Vale, who was given a small gas mask moments before the attack. The Joker then called upon his boombox operator, Lawrence, to play the song "Partyman" as the core group entered the building and defaced the art. Shortly thereafter, Batman crashed through the overhead skylight, rescued Vale, and fired a zipline to the main entrance. A smoke bomb was then thrown near the main doors, which confused the Joker Goons.

The Joker Goons entered custom Joker Goon Cars that were parked outside the Flugelheim and pursued the Batmobile. Accompanied by Bob, they succeeded in cornering Batman and Vale, but were unsuccessful at apprehending them as three of them were defeated by the caped crusader, and Bob chose to retreat.

Four or five Joker Goons were seemingly killed when Batman blew up Axis Chemicals. A small group gathered around the Batmobile as it shielded up in the heart of the facility. Then, a small and spherical bomb was released from the Batmobile and caused a chain reaction, which destroyed Axis Chemicals. The Joker's Helicopter lifted off during the commotion, hovered above, and mocked the futility of Batman's attack before it turned and left for downtown Gotham City.

A large number of unidentified Joker Goons stood guard during Gotham's 200th Anniversary Parade. The main Joker Goons distributed garbage bags that were full of cash to crowds as "Trust" was played over the loud speakers. An army of subordinates worked security during the event and were stationed along various buildings along Gotham Square. The Blonde Joker Goon, who was stationed at a spotlight, gave the signal for the others to put on their gas masks when Joker pulled his activation device for his Ballons.

When the balloons were activated, some Joker Goons held onto the ropes as they were released into the air. Gotham Globe Reporter Alexander Knox made several attempts to beat the Joker Goons with a baseball bat as they lifted off the ground. One Joker Goon fell from a balloon and crashed through a street sign before he hit the pavement. Batman then arrived in the Batwing and pulled the balloons far above the city. After that, the Joker Goons were ordered to disperse the crowd from the street while Joker confronted the Batwing. In the ensuing battle, many Joker Goons were killed as collateral damage from the Batwing's M134 miniguns fired at the Joker, which then missed him completely.

Lawrence and the Belltower Joker Goon were then planted in the belfry at Gotham Cathedral during the festival. The Joker chose the highest point in Gotham's skyline to make his final stand against Batman. After the Gymnast Joker Goon and Lawrence tried to assault Batman (though failed), the Belltower Joker Goon moved in and attacked the Dark Knight with a Block and tackle. He, too, was defeated by the dark knight, who sent him plummeting down the stairwell of the tower.

Two Joker Goons manning the Joker's helicopter arrived to rescue Joker from the Cathedral, though their attempt to save their boss was thwarted by Batman, who tied a gargoyle to Joker's foot, ensuring that it came loose and fell, the extra weight causing Joker to fall to his death.

Remnants rounded up by GCPD

After the Joker's demise and loss of several key members, the Joker Goons were disbanded. The GCPD then rounded all of the remnants according to Commissioner Gordon.

According to one account, other criminals were inspired by the Joker Goons to adopt the Joker's gimmicks to commit crimes. It is unknown whether any of its members had ties to the previous organization. 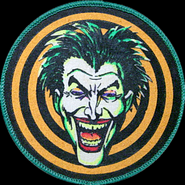