The Joker King AKA Doug Tan is Dana Tan's criminal brother and king of the Jokerz.

A troubled youth who admired and and tried to emulate the original clown prince of crime. After years of what his parents viewed as an unhealthy obsession, Doug was stripped of all his Joker paraphernalia. Regardless, Doug continued his idol worship of the Joker and eventually joined up with the Jokerz. Doug was dissatisfied with the childish nature of the gang and the petty crimes they committed. Doug had plans to make unite the various Jokerz around the country and bring honor to their namesake. Eventually Doug was imprisoned and while incarcerated he was able to spread his vision. Soon Doug was named the Joker King and had a united force behind him. He got parolled and acted like he changed. Bringing all the Jokerz to Gotham was phase one of his plan. Doug first used the Star City Jokerz as a test to study the Batman. However, he decided to study the Batman further and asked his right-hand clown to send the Calvin City Jokerz to Reed Park. The Joker King used hypnotic drugs in a mass gathering of Jokerz to carry out mass destruction on Gotham's infrastructure. Members of the Jokerz gang were strapped with explosives and "willingly" taking out buildings along with themselves.

While he and his right-hand clown, Pally Otchee look on to the chaos and destruction, Joker King explains the message before killing Pally. Joker King confronts his family at the Gotham City hospital, but they are saved by the combined efforts of Bruce and Terry. Later, Joker King gets the upper hand on Batman, but he is saved by Dick Grayson. After a final showdown between Batman and the Joker King, his reign of terror ends when his foot is caught by some rope and he falls off the ledge. The swing from the rope causes Doug's body to slam against the concrete wall of an unfinished building. The trauma inflicted to Doug's head kills him instantly. With a smile, the Joker King meets his end. 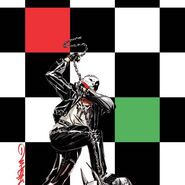 Pally coming with news to the Joker King.

Pally telling the Joker King why he became a Joker. 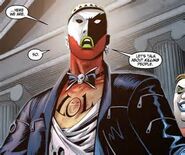 The Joker King making his appearance to his followers.

The Joker King explaining the Joker's "message" to Pally. 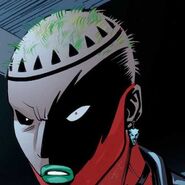 Add a photo to this gallery
Retrieved from "https://batman.fandom.com/wiki/Joker_King?oldid=210739"
Community content is available under CC-BY-SA unless otherwise noted.