"Julie, I'm not the marrying kind. There are things about me that you wouldn't understand."
―Bruce Wayne[src]

After they dated for over a year, Julie proposed to Bruce. But Bruce, who knew that would contradict his responsibility of being Batman, gently turned Julie down. Julie would not give up and told Bruce to think it over before he made his decision.

What became of Bruce and Julie's relationship following Poison Ivy's arrest remained unclear, but they presumably continued to date.

Julie Madison was Bruce Wayne's very beautiful, charming, upper-crust girlfriend. Unlike his previous key girlfriends Julie did not discover Bruce's nocturnal identity. However, she was very keen to settle down with Bruce despite his reputation as a reckless 'ladies man', and it is implied that she was becoming increasingly frustrated with Bruce's apparent inability to be a 'one-woman man'.﻿ 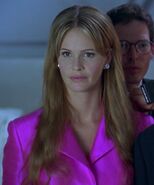 "You just called me Ivy. Who's Ivy?"
Add a photo to this gallery

Julie and Batman.
Add a photo to this gallery

Retrieved from "https://batman.fandom.com/wiki/Julie_Madison_(Elle_Macpherson)?oldid=208397"
Community content is available under CC-BY-SA unless otherwise noted.