The Justice League of America

A wealthy Gotham City heiress and former circus performer, Kathy Kane was inspired by Batman's example to become a costumed crimefighter. Using her acrobatic training, an arsenal of gadgets (many disguised as feminine makeup products and jewelry), and money inherited from a late relative, Kathy debuted as the Batwoman. It was suggested that she was extremely infatuated with Batman to the point that she assumed the costumed identity in order to get close to him and hopefully engage in an emotional relationship with him. It worked but not quite in the way she had hoped, as the Batman wanted her to retire from the role for fear that she would be hurt in her costumed exploits.

Undeterred, Batwoman continued to operate in Gotham. Her dual identity was soon discovered by her niece Betty Kane, who debuted as Batwoman's sidekick, Bat-Girl. The duo had romantic aspirations towards Batman and Robin and would often attempt to win their affection. After a short career, Batwoman eventually gave up costumed life and any hope of pursuing Batman. She returned to her first love, the circus.

Kathy operated the traveling Kane Circus until she became embroiled in a conflict between Ra's al Ghul and The Sensei. Targeted by the League of Assassins for her past connections to Batman, Kathy re-entered the hero's life. Tragically, while the Dark Knight was busy battling the Bronze Tiger, Kathy was murdered by members of the League.

This version of Kathy Kane was subsequently erased from existence by the events of the Crisis on Infinite Earths. However, she may have been restored by the similarly timeline-altering Infinite Crisis (see Post-Crisis).

A version of Batwoman was also known to exist on the world of Earth-Two. Her early history is identical to that of the Earth-One Batwoman.

Kathy would continue to operate in her costumed identity until around the early 1950s when she learned that Batman had become deeply emotionally interested in someone in his unmasked identity. While Wayne never revealed his identity to her, or explicitly told her of his private life, she said she knew of his change in attitude to her and assumed as such. She largely retired from her costumed role soon after this, though she continued to "help out" Batman on occasion, not realizing that Grayson had replaced Wayne in the role.

She learned that Wayne was the original Batman when his costumed identity was revealed to the general public with the death of Wayne's wife, Selina Kyle. It was not revealed if Wayne ever returned her feelings after the death of Selina. It was suggested that he did for she lamented about her feelings for Wayne when the Earth-One Wayne came to Earth-Two suggesting that she and the Earth-Two Wayne had finally revealed their feelings to each other directly. Kane realized that he was not the love of her life reborn, but was a completely new person. She finally realized that her chance at loving Batman was over and retired from the role and settled down to a civilian life.

If she had not died in the intervening years since that meeting with the Earth-One Batman, she was killed along with everyone else on his native Earth-Two in the Crisis on Infinite Earths and completely erased from history.

Though her exploits as Batwoman were erased by the Crisis, Kathy Kane is known to have existed in the post-Crisis DC Universe. Flamebird (Bette Kane, the former Bat-Girl) has made mention of an Aunt Kathy and for a time Kathy's murder haunted the repentent Bronze Tiger.

After the DC timeline was altered once again by the Infinite Crisis, certain aspects of Batwoman's history may have been restored. Batman #682 features a Batwoman in a flashback sequence. The modern Batwoman (Kate Kane) has been referred to as "Katherine the Younger," implying a mother with the same name. Additionally, the new Batwoman has been shown to have a stepmother named Catherine, though it is not yet clear if this is Kathy Kane. 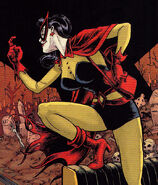 Retrieved from "https://batman.fandom.com/wiki/Kathy_Kane?oldid=77560"
Community content is available under CC-BY-SA unless otherwise noted.