Batman Wiki
Register
Don't have an account?
Sign In
Advertisement
in: Locations, Batman: The Animated Series, Batman Beyond,
and 2 more

Lazarus Pits are natural phenomena in the DC Comics universe. They are commonly used by Ra's al Ghul for their restorative powers and used to save the lives of those close to death.

Lazarus Pits were accidentally discovered by Ra's al Ghul in an effort to cure a dying prince of the Sultan he worked for. Ra's al Ghul dug an experimental chemical pit where he discovered the restorative chemical pools that he dubbed a Lazarus Pit for its abilities to heal those at death's door. After using the pit to save the life of the prince, a side effect of the pit's restorative abilities revealed itself as the prince went mad and killed Ra's al Ghul's wife Sora. Blamed for his wife's murder, al Ghul was left to die, buried in the desert, but was soon rescued by his own tribe and a boy named Huwe. Afterward he used the tribe to gain vengeance for what happened to him and proceeded to call himself the "Head of the Demon".

It was not until he met Batman that others who weren't close to him learned of the existence of the Lazarus Pits around the world. Others who have either discovered or used the pits include: Jason Todd, The Black Canary II (Dinah Laurel Lance), The Riddler, Cassandra Cain, Lady Shiva, The Joker, Kobra, Nora Fries, King Snake, Duela Dent, The Batman Clone, Bane and Batwoman. Ra's, during a hospitable period, revived Dr. Brian Bryan, a close friend of Azrael.

Beyond him, however, Bane and Batman together also served an important role in the history of Lazarus Pits: the destruction of nearly all pits on Earth. Now while supposedly only one pit exists, there are actually four remaining. The first belongs to Ra's al Ghul's daughter Nyssa, who also discovered a way to use the pits indefinitely — whereas before a pit could only be used once. The second is located in the Batcave, created by Batman after he learned that the Pits were necessary to maintain the stability of the world, but wanting to ensure that Ra's could never use the pit to return from the dead again. A third seems to exist high in the Himalaya mountains, used by Black Adam to revive Isis. In Batman Annual #26, published August 2007, a fourth Lazarus Pit was revealed to exist in the Australian outback.

In Batman: The Resurrection of Ra's al Ghul, it is revealed that al Ghul has access to a "Fountain of Essence," which has similar longevity, rejuvenation, and youth restoration abilities, but it does not appear to have the insanity side effect. Having returned to life in a crumbling body, Ra's seeks a permanent young one to take as host, which he decides to be his grandson Damian. After a fight with the Sensei, who declares himself to be Ra's father, Batman is stabbed via a cane in the chest and pulls the Sensei down into the pit with him. Sensei is killed for being an unsick user, but Batman is healed to full health and slightly de-aged.

In the DC limited series 52, week 6, Booster Gold enters Rip Hunter's lab to find a chalkboard filled with cryptic clues on different aspects of the DC Universe. One of them was the clue "The Lazarus Pit RISES".

Lazarus Pits are composed of a unique unknown chemical blend that bubbles up somewhere within the Earth's crust to the surface at key points on Earth, typically at the junction of ley lines. The substance possesses the ability to rejuvenate the sick, injured and even resurrect the dead. The pits also decrease the age of the user depending on how long they stay submerged in the pit. If a healthy person goes into the pits, they will be killed in most instances.

In addition to the pits' regenerative uses, their power has also been used as a weapon. When Nyssa confronts the Injustice Society, she claims that the staffs wielded by her soldiers "channel the power of the Lazarus Pits" and have the ability to destroy both Solomon Grundy and Gentleman Ghost.[1]

In the New 52, the Lazarus Pit's formula is a tainted variation of a chemical called Dionesium which in it's purest state is capable of perfectly healing wounds, resurrecting the dead and even the giving of super-powers. Dionesium was also responsible for the super-villain Vandal Savage, the Talons who work for the Court of Owls, and at one point the Joker.

Though Lazarus Pits are undeniably powerful and useful, they come with side effects, both of which happen immediately after the user emerges. The user both becomes temporarily insane (although when it was used on The Joker, it temporarily rendered him sane) and gains increased strength for a brief period.

Each of the Lazarus Pits can only be used one time by a user, however Ra's al Ghul's daughter Nyssa discovered a way to make the Lazarus Pits last indefinitely, though how she does this is never revealed.

The Lazarus Pits have been used by multiple characters throughout the Batman universe, which include:

In Superman & Batman: Generations, Ra's al Ghul offers Batman a chance at immortality as he discovered a means of gaining true immortality (without the madness) from one Lazarus Pit. In the process two souls enter and the Pit destroys one while imbuing the other with youth and immortality. Batman survives this process, subsequently becoming immortal (Although he is not a true immortal, as he ages one year for every century). With Ra's al Ghul gone he uses his criminal empire to set up an anti-crime information network.

In the Batman Begins novelization (which has more backstory added by Dennis O'Neill), a reference to "The Pit" appeared in Ra's al Ghul's journals. The Pit's history (chronicled in a manuscript Bruce photographs at an Olympus Gallery in New York City after returning home) matches its history in the comics. However, there appears to be only one. The side effects of the dunking in the Pit (madness and violence) are still present.

While not an actual Lazarus Pit, another pit that shares the same design. There is a prison called the Pit that houses dangerous inmates and shares the same side effects as a Lazarus, madness and violence.

Years ago a young girl managed to get out of the Pit by herself. Since then inmates watch as many have tried and failed over the years in escaping their fate. After being sent to the Pit by Bane and healing from his back injury caused by him, Bruce Wayne was the only one to successful climb out of the Pit after several months of rehabilitating.

Notably, climbing out the Pit would symbolize one's rebirth, much like how a Lazarus Pit would re-invigorate one's health into being the prime of their life thus making them younger again.

In Batman: Arkham City, Ra's al Ghul used a Lazarus Pit underneath Arkham City to rejuvenate himself to battle Batman as he was in a near-death state after he was revived from a corpse. Later on in the game, Talia offered The Joker use of that same Pit as a cure for the Titan Disease if he spared Batman's life, though multiple double-crosses prevented that. It was discovered that the Pit in Arkham City was part of Wonder City and it eventually exploded when Clayface and Batman fought inside the Monarch Theatre.

It should also be noted that the Pit was underneath the Monarch Theatre in the game. It was unknown if there were any other Pits in the world during the "Arkhamverse", although Batman mentioned that the particular pit featured within the game had been the one that Ra's had used for centuries, which indicated that this might have been the one and only pit within the Arkhamverse and, as a result of its destruction, cemented the deaths of Ra's, Talia, and the Joker once and for all.

The formula called the "Lazarus Chemical" which was part of the Lazarus Pits, was the source of the swamps' strange properties that was responsible for the origins of the seemingly immortal zombie, Solomon Grundy. 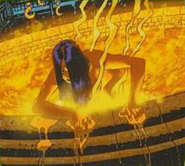 Talia al Ghul bathing in the waters of a Lazarus Pit 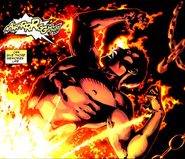