"Crime. Despair. This is not how man was supposed to live. The League of Shadows has been a check against human corruption...for thousands of years. We sacked Rome. Loaded trade ships with plague rats. Burned London to the ground. Every time a civilization reaches the pinnacle of its decadence...we return to restore the balance."
―Ra's al Ghul[src]

The League of Shadows was an organization led by Ra's al Ghul in the film Batman Begins, and later by Talia al Ghul in The Dark Knight Rises.

The League of Shadows was an ancient and powerful secret society whose stated purpose was to restore balance to the world by enacting purges at various points in history. They targeted places they deemed were the greatest sources of civilization's corruption and decadence, places that led to suffering and injustice. Acting as a self-appointed check against human corruption for thousands of years, some of the previous activities of the League included the sacking of Rome, starting the Black Plague, the great London fire, and the Gotham economic depression.

The men who have sworn allegiance to the League of Shadows come from many different backgrounds; former soldiers, mercenaries, assassins, petty criminals, and ordinary men. However, all of them share a common similarity of hating what they define as evil and a desire to serve what they call true justice. Every member of the League of Shadows is fanatically loyal to the League's cause. It is this fanaticism in which every warrior knows that he is expendable, his life forfeit, if it means fulfillment of the League's plans. They are trained in the arts of theatricality and deception.

Thirty years before the events of The Dark Knight Rises, a foreign mercenary in an ancient part of the world was exiled by the warlord that he worked for because he married the warlord's daughter. The mercenary's pregnant wife was imprisoned in a Pit as price for his exile. The mercenary became Ra's al Ghul, the leader of the League of Shadows, and one day his young child, Talia, found her way back to him after escaping from the prison. The League stormed the ancient prison to exact revenge over the death of his wife in the prison. In the process they rescued an inmate, Bane, the protector of his young daughter in the prison. Talia and Bane were then trained by the League, but Bane was excommunicated by Ra's al Ghul for reminding Ra's of the hell he left his wife to die in and for loving Talia. Talia resented her father's decision. The League was then based on a mountain in the Himalayas (though other bases around the world may have existed).

Bruce Wayne joined the League of Shadows to seek the means to fight injustice. He was still traumatized by the murder of his parents during the Gotham depression but had learned to give up on the idea of revenge. While traveling the globe, he was recruited from a Bhutanese prison by a man calling himself "Ducard", who saw great potential in the angry young man. During the final test in his training, Bruce was asked to act as an executioner and learned what the League really was about, that their leader wanted him to lead a mission to destroy the city of Bruce's birth. Bruce then destroyed their base and left the man he believed to be Ra's al Ghul to die there. However, he saved Ducard, his teacher while in the League.

Over seven years after his disappearance from the city, Bruce returned to Gotham and planned to root out its criminality and the corrupt. He became Batman to enact this plan, and used Ducard's lessons in the martial arts, stealth, intimidation, and theatricality. Meanwhile, the League was busy bringing a fear toxin (created from a hallucinogenic blue flower grown near their Himalayan base) into Gotham by employing some of Gotham's criminals, most notably Carmine Falcone and The Scarecrow. After Batman put both men behind bars, the League was forced to act sooner than expected and Ducard revealed to Bruce that he was Ra's al Ghul. Using a microwave emitter stolen from Wayne Enterprises, they began vaporizing the city's water supply, which the toxin had contaminated. Everyone who breathed in the toxin turned on each other in blind panic.

Batman, with the help of Jim Gordon, was able to stop the League before it could vaporize all the water in the city. In the process, Batman left Ra's for dead on a train that crashed, causing him to perish in the crash and resulting explosion.

Following the death of Ra's al Ghul for which she blamed Bruce Wayne, Talia forgave her father and attempted to bring justice over his death and finish her father's work with the aid of Bane, who had become known as a mercenary with a rumored reputation following his excommunication from the League. Talia posed as Miranda Tate and came to Gotham, and became a shareholder and board member of Wayne Enterprises to fund the creation of a nuclear fusion reactor for which Bane abducted Doctor Pavel to turn into a nuclear bomb years later.

Batman asked Selina Kyle to take him to Bane after Bruce lost his fortune due to the risky trades made during the League's attack on the Gotham Stock Exchange so that Talia could takeover Wayne Enterprises and the reactor. In Bane's sewer lair underneath Gotham, Batman was challenged to a fight by Bane, wherein he outlined his aim of fulfilling Ra's al Ghul's destiny by destroying Gotham. Bruce was sent to the Pit after his defeat so that he could see it unfold and suffer.

The League of Shadows employed Gotham's older orphans to work in the sewers, as well as John Daggett's construction crews to pour explosive cement throughout the city that was later detonated. The city was held hostage as Bane posed as its liberator in a false revolution. The ranks of the League of Shadows were augmented as former Blackgate prisoners and others joined their army. Talia continued to use her false persona to undermine Batman's allies in various ways such as alerting Bane of a meeting with U.S. Special Forces within the city and misleading Gordon's group of cops into believing that a decoy truck was the one containing the nuclear bomb.

After Batman's return, Talia revealed herself to him and unsuccessfully used her trigger to detonate the bomb and left city hall to ensure its detonation. Bane was shot dead by Selina on the Batpod, and Batman fired on Talia's bomb truck in his aerial vehicle the Bat and led it to crash where she drew her last breaths, confident her plan for the nuclear annihilation of Gotham was unstoppable. The other members of the League of Shadows in the city were killed or captured by the GCPD. Batman saved the city by sending the bomb far away from Gotham over the water where it detonated. 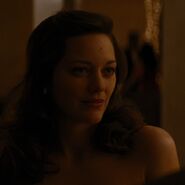 Talia pretending to be Miranda Tate

Bane, Barsad, and the League's forces at Gotham City Hall 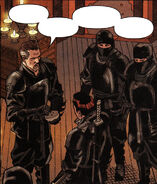