Diana Muldaur (Voice)
Morena Baccarin
Krista Bridges
Dr. Leslie Maurin Thompkins is a doctor and a friend of Batman. Close friends with his parents, Leslie serves as a godparent, along with Alfred Pennyworth, and close confidante to Bruce Wayne.

Leslie is portrayed as having been a close friend of Thomas Wayne. She took it upon herself to look after Wayne's son, Bruce, after the boy's parents were killed, often acting with the family butler, Alfred Pennyworth, as a parental figure and guardian, although other sources have her as a woman who comforted Bruce immediately after his parents' deaths. During that time, Leslie was concerned with Bruce's behavior as he grew increasingly antisocial. She was even more perturbed when she discovered that, in his adult years, Bruce spent his nights fighting the criminal elements of Gotham as the Batman.

Leslie disapproves of Bruce's vigilantism, and feels partly responsible for his transformation into Batman, fearing that somehow she failed him as a role model. Bruce has, though, admitted to feeling guilty for being unable to live up to her pacifist example. She also has been linked to Alfred romantically on more than one occasion.

Dr. Thompkins ran a clinic for criminals and drug addicts in Gotham City. While the majority of her patients were repeat offenders, she continued to do her job with great perseverance and determination. During the Batman: No Man's Land storyline, she ran the town's only medical clinic, operating under a strict 'No Violence' policy regardless of her patients. Even Killer Croc respected the rule and stayed out, despite his strong desire for revenge against Victor Zsasz.

Stephanie Brown, then acting as the fourth Robin, suffered serious injuries at the hands of Black Mask during the Batman: War Games crossover, and was taken to Dr. Thompkins' clinic for treatment. Initially thinking Stephanie died of her injuries, Batman later discovered, during the War Crimes storyline, that Leslie deliberately treated her improperly, resulting in her death while hoping that it would teach Batman the lesson that his constant use of children as partners was putting their lives in danger.

After liquidating her assets and giving them to Stephanie's daughter, she fled to Africa. Batman followed her and forced a confession, coldly informing her that he may not stop violence, but he had never thrown another body onto the pile in the hopes of making a statement. He left warning her that she was just another murderer in his database, and if she ever returned to the United States, or even practiced medicine again, he would have her arrested.

Recently, a mysterious familiar figure has been stalking Tim Drake wearing Stephanie's Spoiler costume, which at one point Tim thought he imagined it to be Stephanie herself. It is later revealed that the stalker is indeed Stephanie, which led into question of whether Dr. Thompkins truly did neglect treatment for her. The details of Stephanie's return reveals on Robin #174, as Dr. Thompkins faked the death of the girl and switched the body with a gang war victim who had a similar body type. Leslie accepted the burden from Bruce in an attempt to protect Stephanie and persuade her to give up a the hero life.

Leslie herself meanwhile has made a recent, and rather unexpected appearance in the miniseries Gotham Underground, having appeared before an injured Nightwing, currently undercover, and offering him aid. It was later revealed that Leslie was a hallucination and it was the Riddler who had saved Nightwing.

Batman was murdered by the New God, Darksied. With him gone, the City of Gotham has fallen into chaos. With Batman gone, Leslie has opted to return to the city and perhaps make up for what she did by lying Bruce. She has reopened her clinic, and been a recurring character in both the Batgirl and Red Robin titles. 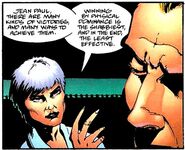 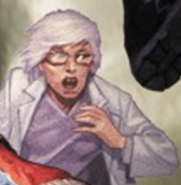 There was a brief riff between Leslie and Bruce when the former faked Stephanie Brown's death in an effort to protect her.