Mrs. Smith
The Greatest Mother of them all

"It isn't easy to foil the greatest mother of them all."
―Ma Parker[src]

Ma Parker was a villainess and enemy of Batman in the Batman 1960s TV Series. She was portrayed by Shelley Winters.

Not much is known about the master criminal known as Ma Parker except that she was a country single mother living with her three sons and one daughter. She had a long criminal record for operating in other states but was never apprehended. Though she has great devotion for her children, she favors her three sons over her daughter, saying that girls shouldn't be in criminal activities.

After operating in all the major cities in the United States, Ma Parker brings her criminal plans to Gotham City. As Police Commissioner Gordon explained, "Her criminal record is incredible." According to Gordon, no other police force in America was able to stop her. Apparently, fear of Batman and Robin had kept her away until she saw a use for the Dynamic Duo. They were the only two who could possibly stop her, and that is what she wanted. She wanted to be caught and thrown in jail. But it had to look like she didn't want to go, because her ultimate plan of action couldn't start until she was in prison! Her caper was one of the best any villain ever tried to pull off in Gotham.

Ma Parker is crafty, clever, but most importantly, she is motherly. When cornered by the law, she turns on a mother's charm, laying a thick story about how she was just trying to provide for her poor children. She portrayed herself as defenseless and submissive. And when the police let down their guard, she would spring into action and escape. So well-tuned were these motherly instincts, upon their first meeting, she duped the Caped Crusaders with her act.

Interestingly, she strongly holds the belief women do not belong in crime. This is odd seeing how she herself is a notorious criminal. Perhaps she was only protecting her young daughter who wished to follow her mom down the criminal path to notoriety. Ma Parker's protests, however, only made her daughter a tougher criminal.

She also has a fondness for knitting and likes to make joke puns. Ma Parker made her debut at the Gotham City Mother Of The Year Awards where she introduces her children: Pretty Boy, Machine Gun, Mad Dog and Legs, robbing all of the women at the ceremony. Ironically she won the award before attempting to rob the women at the event.

Batman and Robin track her down to her hideout at Cherry Blossom Road and give her sons a good thrashing but knowing Batman's weakness to take pity on elderly people (especially mothers), Ma begs Batman to go easy on her so she can turn herself in peacefully. When Batman takes her outside to the police, Ma Parker drops a smoke bomb that was concealed in her hair. She and her family make their escape but Pretty Boy is arrested. Batman vows that he won't rest until Ma Parker is in Gotham State Penitentiary, but Pretty Boy laughs and says neither will Ma.

Ma Parker and the rest of her family rob a theater that was viewing: "The Woman in Red". After seeing the Dynamic Duo they hijack a truck to make their getaway. Before Ma steals the truck, she tells the driver that she has a slight headache and that she wants to pick up a pill. Her boys jump in the back but Machine Gun gets left behind and is captured by the Dynamic Duo.

Batman and Robin then find her looting the Gotham Drugstore where they capture Mad Dog, but Ma escapes again. Ma Parker then hides in an old folks' home under the alias of "Mrs Smith" with Legs disguised as a nurse. However, they are both captured by the Dynamic Duo and taken to Gotham State Penitentiary.

But Ma Parker had planned this all along so that she could set up a new criminal headquarters at the penitentiary to commit their crimes. She holds the warden hostage and takes over the prison. Although she wins the instant support of Catwoman and a number of other inmates, she decides the leave the two greatest criminals in the penitentiary, the Joker and the Penguin in solitary confinement until they recognize her as dominant when Catwoman asked about them.

Ma Parker then makes an attempt to kill the Dynamic Duo by sending an inmate disguised as a prison guard to plant a bomb in the Batmobile that will explode when it reaches 60 mph. However, Batman and Robin escape her trap and go back to check on Ma and her family.

When everything seems normal, they reluctantly leave the penitentiary. Ma Parker holds a meeting with most of the prisoners in the prison and say that the more criminals Batman and Robin arrest the more talent they will have to form the Gotham Pen gang and the penitentiary will be their official hideout. After taking an alternate route underground, Ma and her gang try to rob an armored car filled with half a million dollars in cash and destroy it.

Batman and Robin arrive on the scene and the gang make their escape, but Batman manages to tear off a sleeve of one of the criminals in the struggle. After examining it, he suspects that Ma is behind this and after hearing by phone that the warden was in trouble, races back to the penitentiary with Robin.

Upon their arrival, the Caped Crusaders are captured and taken to Ma Parker, who straps them to two electric chairs that are scheduled to execute them at midnight. She leaves Legs in charge to watch them but she is tricked into leaving after Batman tells her that Ma and the boys may be hiding something from her.

Batman manages to contact Alfred Pennyworth, telling him to tell the Gotham Board of Electricity to shut off the penitentiary's power precisely at midnight.

By the time Ma returns and is about to pull the switch to set off the electric chairs, the whole power in the building has shut off. Batman and Robin break free from their restraints and fight Ma's boys. After an ensuing battle, Ma Parker is finally arrested, for good.

Ma had her family and a few deadly criminals to help in her schemes:

Ma Parker and her children were the only villains Batman and Robin faced which used guns as a weapon of choice. They all favored machine guns, easily out gunning the Gotham City Police Department. Luckily, Ma Parker and her gang were the worst shots in the criminal business. What they lacked in quality, however, they made up for in quantity. By laying down a vicious salvo of lead rain, they could keep the police at bay while they planned and made their escape.

Ma Parker was not without extra gadgets, however. Concealed in her hair, disguised as hair clips were smoke bombs which exploded upon contact. The resulting thick smoke was the perfect screen for a quick escape just when the law thought they had her.

Part of the time she was in Gotham City, she was hiding out in the Gotham City Old Folks Home under the guise of an invalid named Mrs. Smith. When Batman and Robin tracked her down, Ma Parker revealed her wheelchair wasn't all it appeared to be. Equipped with powerful rocket-boosters in the back, the chair was capable of carrying Ma Parker at great speeds. Unfortunately, the chair could not pass through walls. While trying to escape Batman and Robin in the old folks home, she crashed into a wall and was carted away. But, prison was her ultimate goal, so the wheelchair was never likely designed to allow for a successful escape. 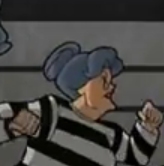 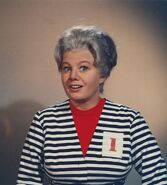 Add a photo to this gallery
Retrieved from "https://batman.fandom.com/wiki/Ma_Parker?oldid=215881"
Community content is available under CC-BY-SA unless otherwise noted.