Batman Wiki
Register
Don't have an account?
Sign In
Advertisement
in: Villains, Arkham Asylum patients, The Society Members,
and 13 more

David Wayne
Benedict Samuel
Amitai Marmorstein
Roddy McDowall (voice)
Peter MacNicol (voice)
Chris Edgerly (Voice)
Dwight Schultz (Voice)
Peter MacNicol (Voice)
Townsend Coleman (Voice)
Robin Atkin Downes (Voice)
Alastair Duncan (Voice)
John DiMaggio (Voice)
Obsessed from a young age with Lewis Carroll's Alice in Wonderland, Jervis Tetch, a brilliant neuroscientist, embraced a delusion that he was the incarnation of a character in the story, the Mad Hatter. Using his hypnotic skills for mesmerism, Tetch as the Mad Hatter has committed many crimes, often themed around the book that inspired him and his love of hats and headgear, going so far as to plant his hats, ranging from pith helmets to bowlers, with mind control chips to amplify his hypnosis skills. Above all other headwear, he covets Batman's distinctive cowl and will stop at nothing to acquire it.

Jervis Tetch, formerly a research scientist, is completely smitten with the works of Lewis Carroll. As his criminal name indicates, he takes the appearance of the Mad Hatter from Alice's Adventures in Wonderland. He is an insane neuroscientist and developed hardware that can control the brain and induce hypnotic states, and often uses hats or other headgear for mind control.

In his first appearance, the Mad Hatter attempted to steal a trophy from the Gotham Yacht Club, but was foiled by Batman while he tried to rob spectators from a high society horse show. Tetch was subsequently sent to Arkham Asylum. Later a very different Mad Hatter appeared, claiming to be Jervis Tetch, but he was revealed as an impostor and subsequently disposed of once the real Tetch re-appeared.

It was in 1983's Detective Comics #526 that Tetch was first portrayed with the mind-controlling devices for which he is now best known. He even managed to slip one into Scarecrow's hat and take control of him for a short time. Tetch seemed to have died under the wheels of a train, but that turned out to have been another trick.

Tetch has even kidnapped Lucius Fox of Wayne Enterprises and held him for ransom. Once again, Tetch was stopped by Batman, but not before using his advanced equipment to feed information from Fox's mind into his computer. In Robin: Year One, Tetch devised a plan to implant his mind control devices in portable tape players, which he gave out to young girls at Dick Grayson's school in order to sell the young girls to millionaire third-world dictator Generalissimo Lee. The young Robin managed to defeat the Mad Hatter, however.

During the Knightfall story line, Tetch was broken out of Arkham Asylum (along with numerous other inmates) by Bane. His first act is having his monkey grab Talon, Bird's falcon and planting a tracking device on its leg. He next shoots up a hat shop and leaves an invitation for Batman to come to his tea party. Meanwhile he invites a number of criminals including Film Freak, the forces them at gunpoint to put on his special hats which puts them under his control. He sends Film Freak off to spy on Bane. Batman arrives and dispatches the Mad Hatter and his goons. Meanwhile Bane kills Film Freak.

One of Tetch's latest plans consisted of implanting his devices in "free coffee and donuts" tickets he handed out in front of the police stations in Gotham. That plan had him controlling most of the cops in the city. He even had Gotham police detectives Crispus Allen and Renee Montoya break into a bank for him.

More recently, in Gotham Central #21 (September 2004), Tetch was trying to escape Arkham Asylum with the aid of a guard under mind control. The guard fired on police and was killed in return fire. Tetch as well was shot multiple times and left in critical condition. It was thought he might have died, but a small appearance in Detective Comics #800 (January 2005), in which he was working for Black Mask, proves otherwise.

While working with Black Mask, Tetch implanted a mind control chip directly into Killer Croc's brain, which caused him to mutate again due to the virus he was injected with by Hush and the Riddler. Croc embarked on a quest to get revenge on those responsible for his mutation, and started with Tetch. Batman arrived in time to save Tetch, but Croc escaped.

During Infinite Crisis Tetch was seen amongst the fighting with the Secret Society of Super Villains during the Battle of Metropolis.

Tetch was revealed to have been involved in the plot by the Great White Shark to frame Harvey Dent for murdering various Gotham villains in the Detective Comics storyline "Face The Face", although in what capacity he was involved is left vague.

Tetch's base of operations in Gotham was destroyed following a search for an atomic weapon, by Robin III, Tim Drake and Captain Boomerang II, Owen Mercer. A recording of Tetch came on a monitor screen and told them that the roof will be the final hat they will ever wear as it fell down on them – Robin and Boomerang narrowly made it out of the building.

Aftward he was approached by Catman, and he has joined the members of the Secret Six in opposition of the Secret Society of Super-Villains; they have recruited him in hopes of a defense against Doctor Psycho's mind control abilities.

When Ragdoll attacked the Secret Six under Dr. Psycho's control, Tetch put on what he called his "thinking cap" and went into a seizure. After the Six crash-landed, they were attacked by the Doom Patrol, who came close to apprehending the Six until Mad Hatter stepped in and used his mind control abilities to subdue the Doom Patrol singlehandedly, going so far as to almost make Elasti-Girl eat Beast Boy before Scandal stopped him. The Six commented to themselves afterwards that even they had no idea Jervis could do this.

It has been revealed that Tetch designed a hat to make him happy beyond the measures of what illegal drugs can accomplish. He also revealed that he had planted miniature listening devices around the House of Secrets to keep tabs on his fellow members. After revealing the true motives of Scandal Savage to leave the team, the Six go after her, finding themselves at Vandal Savage's temple in the mountains, where Doctor Psycho starts

attacking the team. Tetch is about to get the upper hand on Doctor Psycho when Cheshire appears and stabs him in the back with a poisoned dagger.

Scandal tends to Hatter's wound, and Catman administers an antidote to Tetch. While the Six face off against Cheshire and Vandal Savage, Hatter takes on Dr. Psycho one on one, and emerges victorious despite his injuries, possibly killing Dr. Psycho with Cheshire's dagger. Hatter saves Scandal from falling to her death, and the Six tell Tetch that they are his friends, something Tetch has never had. As Hatter stands atop Savage's destroyed base with Ragdoll, he expresses deep happiness and excitement about having friends. He says to Ragdoll that he will be a very good friend in return. Ragdoll then pushes Hatter off the roof, seemingly to his death, saying there's only room for one dandy freak on the team. Miraculously, Tetch survived the fall. Heartbroken, he vowed revenge on the rest of the Six.

Tetch often utilizes his technological mind-control devices to commit his crimes. He is also a master of hypnotism and mind control. The Mad Hatter also possesses unique knowledge with hats, especially one-of-a-kind headwear. He uses these skills to carry out his obsessive fixation on Alice in Wonderland.

Jervis Tetch is fascinated with hats of all shapes and sizes, as well as Alice's Adventures in Wonderland and its sequel Through the Looking Glass, particularly favoring the chapter 'A Mad Tea Party'. He is obsessive-compulsive, highly delusional, suffers from psychotic manic depression, and can even sometimes be homicidal. It has been hinted in recent years that he is a pedophile, kidnapping little girls with the name "Alice". He won't eat a piece of food that doesn't have a hat on it. He exhibits delusions and thought processes typical of schizophrenia. Not only is he often known to quote and associate with Carroll's Wonderland novels, but he often fails to discern between these stories and reality. He will go to insane lengths to get what he wants. 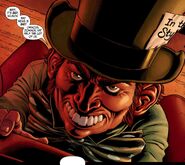 Mad Hatter is mentioned in the novelization of Batman & Robin as an inmate of Arkham Asylum. Some reports have also claimed that he would have appeared in the unproduced Batman Unchained, though most have debunked this. The Mad Hatter also appeared at the close of the abandoned Batman: DarKnight script as teaser for the next film.

A younger Jervis Tetch appeared in the third season of the television series Gotham and was portrayed by Benedict Samuel. He is a hypnotist who arrives in Gotham in order to try and find his missing sister Alice.

The Mad Hatter will appear in the third season of Batwoman, played by Amitai Marmorstein.

The Mad Hatter appears in the Batman: The Brave and the Bold episode "Legends of the Dark Mite." He, along with The Joker, Catwoman, The Riddler, Killer Moth, Mr. Freeze, Kite Man, Two-Face, Penguin, Catman, and several other villains are shown briefly in Bat-Mite's imagination.

The Mad Hatter has gone through many changes in his physical appearance over the years, but has always had the basic Hatter look. In his debut, he was a very short brunette- or auburn-haired man. When he reappeared in the early 1980s, he was depicted as of average height, with blond hair. In later years, he was short again but with white hair. Today, Tetch has red hair much like his impostor did, but his size and height still seem to vary. Constants throughout his depictions are a slightly overlarge head and (more recently) very large teeth. In the recent Secret Six #6 (December, 2006), Tetch claims to suffer from macrocephaly.