Batman Wiki
Register
Don't have an account?
Sign In
Advertisement
in: Batman (1960s series) Characters, Villains, Batman: The Brave and the Bold Characters

Batman (1960s series)
Jervis Tetch also known as The Mad Hatter has what you might call an unhealthy obsession with all forms of headgear. From fancy derbies to turbans to pitch helmets, he'll steal them all. But the thing he desires most is Batman's cowl.

Citizens of Gotham were having their hats stolen. Not everyday citizens but members of the jury that put criminal Jervis Tetch into custody. It seems that he wants revenge as well as Batman's cowl as his thirteenth hat. He traps the Caped Crusader in super quick-drying plasterer but he escapes. Batman and Robin confront him but Jervis straps them to a hat machine which will cut them open. They escape and defeat him by knocking him into a vat of shrinking solution. He is presumably sent back to prison (BM: The Thirteenth Hat and Batman Stands Pat).

He escaped from prison again in an attempt to steal Batman's cowl once more. (BM: The Contaminated Cowl and The Mad Hatter Runs Afoul). Recently, he became tired of stealing hats and began using hats to commit other crimes. Last time he escaped from prison was during a prison softball game, when he stole home plate along with Warden Crichton's cap, and just kept on going. It is unknown whether his obsession will resurface, however. The Mad hatter's most frequent hideout is the defunct Green Derby restaurant.

Just as Batman and Robin do not go at crime-fighting alone, Mad Hatter needs fellow partners in crime to assist him with his malicious schemes: 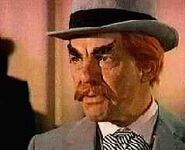 Mad Hatter with his Mesmerizer