Grey DeLisle (voice)
Sarah Schenkkan
Rachel Matthews
Magpie was an enemy of Batman with an obsession for shiny objects.

Growing up, Margaret Pye loved shiny things and wanted them all for herself. She was ridiculed for her obsession, and nicknamed Magpie. This obsession just got stronger as she grew up, and she took a job as curator of the Gotham City Museum of Antiquities to be surrounded by the valuables she loved. This love became compulsive jealously when she realized she would never possess the antiques around her.

Margaret's mind snapped, and she started a crime-wave as Magpie. She made booby-trapped duplicates of famous museum pieces, and put them in place of the genuine article. She felt she was taking what was rightfully hers, not stealing. She also recruited a small gang of thugs to ensure that she was never caught. She was a harsh employer, killing any goon that failed her expectations.

One Night in Gotham City

She was unfortunate enough to be the first criminal captured by the team of Batman and Superman working together. She had an emotional breakdown after she realized that they were going to take away her shiny things. After this, Margaret was institutionalized within Arkham Asylum.

She is seen in the six part series "Arkham Asylum: Living Hell " in a cell with Poison Ivy, trading sex to Doodlebug in exchange for "shiny things" such as Jane Doe's shank. She and Poison Ivy later dig a tunnel beneath Arkham in an attempt to escape.

Although seen working with Intergang in the pages of 52, as of One Year Later she was found dead, murdered by the Tally Man II under the orders of Great White Shark, who was chipping away at the Penguin's empire.

Margaret Pye's body was reanimated along with several other villains during Blackest Night. Along with Abattoir, Deacon Blackfire, Blockbuster, King Snake, KGBeast, The Trigger Twins, and the Ventriloquist, she has received a Black Lantern Ring. She has been seen terrorizing the city, and tearing out the hearts of innocents to feed on their emotions and life force when they're feeling the most fear.

Magpie makes a cameo appearance in the film alongside other Batman villains. 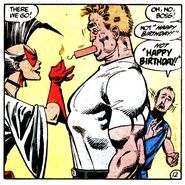 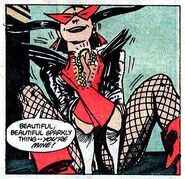 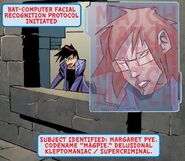