"(Shrieks)"
―Man-Bat before his boss-fight[src]

Man-Bat is a villain that appears in LEGO Batman: The Videogame. Doctor Kirk Langstrom was a scientist specializing in the biological study of mammals, especially bats. In an effort to cure his growing deafness, the scientist develops a formula intended to allow humans to be able to mimic the sonar that bats naturally possess. When he tries this formula on himself, however, he winds up transforming into a monstrous human/bat hybrid driven purely by instinct that terrorized Gotham City for a short while.

Man-Bat is one of the many inmates who breaks out of Arkham Asylum. He joins The Penguin's group along with Killer Croc, Bane, and Catwoman, and together they plot to take control of penguins throughout Gotham and use them to attack citizens. Man-Bat placed a box of penguins in Gotham ready for them to be controlled, and then proceeded to the Gotham Zoo to wait for Penguin and Catwoman while his fellow criminals prepare their control device. By the time Penguin and Catwoman reach him at the zoo, they have all of the components for their device but the Dynamic Duo are not far behind them. Penguin and Catwoman rush past Man-Bat as they proceed to the Arctic Lair and unfortunately knock him back down into the boat they arrived on. Man-Bat is then discovered by Batman and Robin who defeat him by using a speaker to stun Man-Bat. He is then sent back to Arkham. He is last seen in his cell, reading a newspaper upside down.

Man-Bat makes a brief appearance in LEGO Batman 2: DC Super Heroes. While he doesn't appear in the main story, he does make an appearance in the Open-World Gotham at Gotham Cathedral. Here he can be fought as a boss, and unlocked as a playable character.

Man-Bat is accessible in the "Batman: The Animated Series" DLC Level Pack, his design based on his DCAU counterpart. He does not appear in the main campaign or as part of a side quest. He is, however, mentioned by one of Riddler's thugs.

Man-Bat from LEGO Batman: The Videogame. 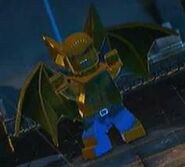